"The BBC has secretly secured £300,000 from the European Union since the Brexit vote on June 23" 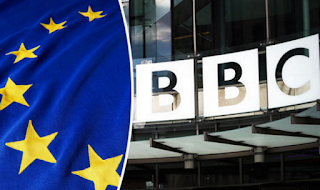 The Daily Express has a striking story today about the BBC headlined EU Broadcasting Corporation: BBC impartiality fears over secret MILLIONS from Brussels.

Though the Express doesn't acknowledge the fact, it seems that the story was originally broken just before Christmas at Heat Street by Miles Goslett:

The BBC has secretly secured £300,000 from the European Union since the Brexit vote on June 23.

Heat Street has established that the broadcaster is participating in what is known as a ‘Horizon 2020’ research and development project for which it collected the sum of 352,750 Euros from Brussels.

The project is called Multidrone and is described as an “innovative, intelligent, multi-drone platform for media production to cover outdoor events, which are typically held over wide areas”.

While £300,000 is a relatively small amount of money to the BBC, which receives a guaranteed £3.7 billion of public funds every April, Multidrone is one of five such EU-backed projects in which it is involved.

The bit that looks particularly bad is this:

...at no point has the BBC made clear to the public that it applied for and received this funding, fuelling charges of secrecy.

Heat Street asked the BBC several times this week for evidence that it had alerted licence fee payers to the fact that it had received this EU money – for example through a press release or news story – but a spokesman refused to address this point.

He would only say that it is up to the public to find out about such funding for themselves via the EU’s website.

The spokesman said: “Details of funding are published by the EU for all to see. We have strict rules in place to ensure that any external funding we receive does not comprise our editorial impartiality or integrity – and BBC News does not receive any grant funding from the EU. This funding is for a Research & Development project co-ordinated by Bristol University looking at the use of drones for media production to cover outdoor events – and it will benefit the wider industry. It has no influence on editorial impartiality.”


“If the BBC has nothing to hide, why didn’t it declare this money? It can only be because it knows it shouldn’t be taking EU funds. It has been the biggest critic of Brexit since we voted to leave in June. Now we can see how close to the EU it really is. It just seems astonishingly greedy for the BBC – which already receives about £4 billion of public money each year – to be sniffing around for this extra cash. It should be ashamed.”

Let's hope Mr Bridgen & Co. keep questioning the BBC about this.
Posted by Craig at 08:26