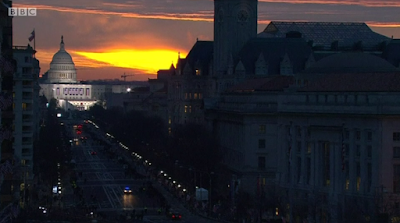 Even Katty Kay's often snide and biased presentation of the Inauguration coverage and Nick Bryant's loaded reports betrayed BBC bias less than this edition of Newsnight.

(a) they were outnumbered by his critics - Danielle Allen, Ben Smith, Susan Glasser (with Michael Wolff as an ostentatiously 'non-aligned' guest) - who (together) got much more airtime.

(c) Michelle Malkin, after a very brief appearance, didn't return later in the programme for the final discussion - unlike anti-Trump Danielle Allen. 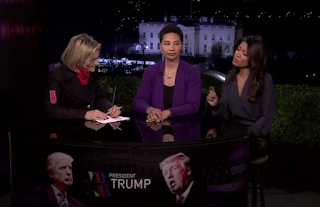 (d) That final discussion had two Trump critics and one neutral who felt (evidently somewhat to his annoyance) that he had, as a journalist, to play devil's advocate on Trump's behalf at one point, given that no one else (Emily included) seemed willing to do so.

(g) Emily Maitlis's commentary and questions were dramatically one-sided, even by the standards of Newsnight. She wasn't playing a straight bat here, to put it mildly.

(h) Emily asking Danielle Allen whether it struck her "just how white the crowd seemed to be that was there on the lawn for Donald Trump".

(i) The programme ended, to wistful yet uplifting music, with a montage in tribute to President Obama.

The whole programme accentuated the negative about President Trump's new administration to a quite remarkable degree.

Others agree. See David Sedgwick's blog (h/t DB on Twitter and Biased-BBC) on the strange mystery of the disappearance of Michelle Malkin.

Still, there was this:


Watching the BBC's live inauguration coverage yesterday afternoon was quite something.

As a blogger about BBC bias I probably do some strange things in advance of such broadcasts - such as re-watching as many clips from the BBC's 2009 first Obama inauguration coverage as I could find on YouTube. (They are spread about haphazardly and very hard to negotiate between, but they start here).

The impression anyone seeing those old clips would get is that the BBC was vastly more relaxed and upbeat about President Obama's arrival in office than Mr Trump's.

It was positive, positive, positive pretty much all the way - the exceptions being about the outgoing Bush administration. A very special day. Very special. Happy Americans, happy Kenyans, happy Obama memorabilia sellers, etc. Happy, shiny people! And a younger, very shiny-looking Katty Kay, sounding as snark-free as can be imagined. Happy days!

Fast-forward to 2017 and it was rather different. Katty snarked away at the Trumpeteers and fawned over the parting Obamas, Nick Bryant harrumphed and looked moody, Jon Sopel stopped his commentary midway to take a once-in-a-lifetime photo of the parting Obamas, and the studio guests helping the BBC team didn't include a single Trump supporter (with predictable results).