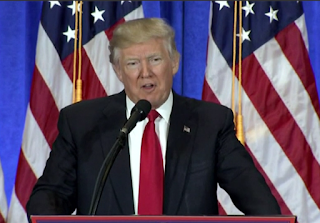 Among the instances of BBC bias that I've heard for myself over the past week, a pair of special Trump-related Radio 4 daily programmes stand out for being entirely typical of that BBC radio station and its failings when it comes to impartiality.

Alan at Biased BBC was worried about both of them, suggesting that the omens weren't good (impartiality-wise) - and he was not wrong.

Trump: The Presidential Precedents (daily at 1.45 pm) was the less egregious. Given that its presenter, historian Adam Smith, is very strongly anti-Trump on Twitter, it could have been worse. A lot of it was interesting, despite all of the recurring academics being clearly like-minded (left-liberal). However, there was a central theme running through all five episodes (on Andrew Jackson, Lincoln, Warren Harding, FDR, Richard Nixon and Ronald Reagan): and that was race - namely that all of these outsider anti-Washington types were pitching to the angry, white, working class, and that racism played a part in these presidents' electoral successes and is feeding into today's Trumpery....

....much as James Naughtie was suggesting this morning and Newsnight strongly implied last night.

The BBC is clearly going to run and run with this one.

The other series was America Rewritten (daily at 9.45 am) - a series in which Observer associate editor Robert McCrum discussed the prospect of a Trump presidency with various (left-liberal) writers - at least of couple of whom also write for the Observer/Guardian.

The point about bias here is that BBC Radio 4 would never have commissioned a right-wing/pro-Trump journalist to interview six right-wing pro-Trump writers. They just wouldn't.

Nor did they consider it a problem to broadcast a series in which every participant in which was, in some way, strongly anti-Trump (though they reflected that very differently) in the week leading up to his inauguration without any counterbalancing series.

To give you a proper flavour of this, here - at some length - are extracts from each of them...

(1) LIONEL SHRIVER: In fact that’s the main thing I feel I am personally going to get out of this. I hope it’s self-evident that I did not vote for Trump, and I don’t think this is a good thing, but as long as it’s going to happen, I’m going to enjoy it. In a sick way. But it’s become such a spectacle every time he opens his mouth or tweets, which I always have a hard time saying.
ROBERT MCCRUM: You said in a recent Observer article that — I quote — ‘Reality has gone make-believe.’
(2) RICHARD FORD: Register to vote. And also, once you register to vote, vote, and vote your conscience. That’s no different really from what I would have advised somebody 10 or 20 years ago. I wrote a piece in The Guardian in which I said basically, as regards this last election, blame ourselves for this. We are the citizens of this country. Blame ourselves if we have someone like Trump, and our only recourse is to fall back upon our sense of citizenship....
ROBERT MCCRUM: Do you feel broadly speaking optimistic about the future of America?
RICHARD FORD: Well yes, and I do for some reasons. One is that Mrs Clinton got almost three million more votes than Mr Trump did: that is reason for optimism. There is reason to think that Americans, if they had to vote again today, might vote differently.

(3) ARIEL LEVY: I don’t feel fantastic, I’m not going to lie to you. But I try to remind myself and some of my friends that, while Trump is in many ways unprecedented, things were pretty bad under George W Bush. I think we forget that: the fog of history goes over that and now people just see his sweet little face and his weird little paintings and they forget how many people died because of those wars that we never needed to have, and how Orwellian his appointments were: you know the person running the agency that’s supposed to protect the environment is in fact an oil magnate (laughs). That’s happening again and I just try to remember we got through it. Like, after that came Obama. You know… I don’t like this. I don’t think it speaks well of my country. I’m embarrassed and I’m sad, and I think it’s a horror, but it’s not the rest of our lives. And I don’t think this is the beginning of the new normal. I don’t think this is going to go on forever.

(4) WALTER MOSLEY: Well it seems for America that this was a kind of necessary mis-step. What you have is the so-called ‘blue’ states, mostly on the coasts, filled with liberal and progressive people who have dismissed the mid-western and the southern states to such a degree, and for so long, that these people say, I don’t care who I vote for as long as it’s somebody who doesn’t have anything to do with you guys. Now it’s a kind of mistake to say that about Donald Trump, but you could see why people would make that mistake. And you also have the other problems in America. For instance, the white male who was in charge for centuries has been kind of winnowed down to being equal and, therefore, the expectations of that guy are something he’s not used to: so that’s another problem that has to get worked out.

(5) MALCOLM GLADWELL: So does Trump set an example of vulgarity, coarseness and superficiality that others follow; does he lower the bar? Or does the opposite happen: that by finally exposing the kind of emptiness of that kind of politics, does he create a backlash which says it’s time for us to elevate politics once again? I don’t know. The last experience with a true American bully — somebody who was this crass and vulgar — was Joe McCarthy. And the Joe McCarthy experience is incredibly instructive. What happens is that for a number of years everyone goes along with it, and by being so coarse and vulgar and by being willing to go places that no one else will go, he has enormous political success in the short-run. And then what happens? People finally get sick of him. This kind of rhetorical strategy has a very limited lifespan. After a certain point, people long for a return to some kind of dignity. I think of this with those people on the religious right who voted for Trump and who’ve given him a kind of tentative support. And I think it’s important to say that it is tentative. They know he’s not one of them. Their patience for his vulgarity will be limited.
There is only so long that people who have been raised in the genteel culture of the Church will put up someone who is so profoundly other, and that’s what happened with McCarthy. Fundamentally decent people who were willing to put up with that for two, three years finally said you know what, I’m not doing it anymore. That same kind of thing will happen. I think someone’s going to stand up and just say you know what, enough. And my guess is that when that happens, there will be a surprising wave of public support in favour of it.

(6) MARILYNNE ROBINSON: I think he embodies something dark in the universal psyche. It’s terrifying to see how willingly he will divide a country that has thriven and historically is dependent on the fact that we don’t deal in those kinds of divisions. If he really puts his imprint on American culture, it will look a lot more like a lot of the unhappy or failed states in the rest of the world. I think we can look to the people that did not vote for Trump — and they are the majority by a considerable margin — to be a very meaningful resistance.
Posted by Craig at 15:33