For a flavour of the BBC's output this morning (see above), here's a transcription of part of the BBC News Channel's mid-morning paper review, featuring author Matthew Green and Sunday Times journalist Sian Griffiths. BBC presenter Maxine Mawhinney's contributions are worth noting. 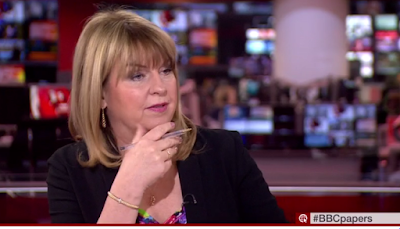 SIAN GRIFFITHS: I don't think at all the story says that Prince Charles is at fault here...
MATTHEW GREEN (interrupting): It implies that Prince Charles is somehow causing a problem to what otherwise would be a wonderful visit.
SIAN GRIFFITHS: No, I don't think that is the tone at all. I think it lays out the argument very clearly. And I think actually the straightforward reporting here...there's one paragraph that says that Trump has repeatedly branded climate change a 'hoax' and a 'moneymaking industry' and has said it was created by and for the Chinese to damage American industry. I think when you have that very straight reporting you think, "OK, you can make up your own mind."
MATTHEW GREEN: The story could have been written very differently. You've got "Senior government officials now believe Charles is one of the most serious risk factors for the visit". Prince Charles isn't the risk factor! Donald Trump is the risk factor!
MAXINE MAWHINNEY: Maybe he can tell Donald Trump all about climate change.
MATTHEW GREEN: I hope so and Donald Trump might possibly agree with him and tell him he's right, just like he did with Theresa May, and that's what narcissists do.
MAXINE MAWHINNEY: Alternative facts again! Here we go! We're going back to Theresa May and President Erdogan in Turkey and the trade deal for that. If we just move, just tidying up the desk here, there we go... So the viewers can see this one. A double page spread there. They "shake on trade deals despite fears over human rights". She's getting into a lot of trouble with holding hands and shaking hands over the last couple of days. Sian, what do you make of this one?
SIAN GRIFFITHS: Well, yes, so she has agreed a trade deal, or is preparing to agree a £100 million deal for fighter jets which could lead in fact to Britain becoming Turkey's main defence partner. But at the same time, she has given Erdogan a very clear warning on human rights at the same time. But again it is this need to find close trade and diplomatic links outside the EU in the wake of Brexit.
MAXINE MAWHINNEY: Again Matthew, it's this sense that the world order has changed. Have morals gone with it?
MATTHEW GREEN: It's musical chairs and, post-Brexit, we're out! Yeah, we never had any morals about selling arms. I mean, look at the billions of dollars we've sent to Saudi Arabia which is now being used to bomb civilians and hospitals in Yemen. So, yes, it's great that the Sunday Telegraph has flagged human rights concerns in the headline there but it obviously doesn't make any difference to British policy. Let's not be under any illusions. We're one of the biggest arms exporters in the world. Post-Brexit, as we walk away from the single market on our doorstep, we going to be even more reliant on selling weapons to anyone who will buy them.
MAXINE MAWHINNEY: I just want to show viewers this other picture on the corner here with the Trump hand-clasp. I've never heard his words before: bathmophobia. This one here. There you go. So apparently he's got a fear of slopes and that's why he was holding her hand!
SIAN GRIFFITHS: It's a wonderful story, isn't it. I think that word 'bathmophobia' is going to be one of the words of the year.
MAXINE MAWHINNEY: It's fantastic, isn't it?
SIAN GRIFFITHS: Because everyone is talking about this astonishing handshake...handclasp as they walk along the White House colonnade and is it a mark of special affection, but apparently it might just be that he's quite afraid of slopes and so he just gathered her hand to steady himself!
MAXINE MAWHINNEY: To get down the slope. They'll be having that slope taken out any moment! But he's also supposed to be afraid of touching people because of germs!
MATTHEW GREEN: I think that photo though will haunt Theresa May, won't it? What a disaster! I mean, the whole thing is so embarrassing. I don't know what the rest of the world must think of Britain right now. If you don't condemn authoritarianism, you become complicit in it and she is teaching us that lesson, unfortunately.
Posted by Craig at 13:17