DB has been catching all manner of moaning BBC types, all tweeting away as 'impartially' as ever. Here are just a few examples:

There's BBC Tech Correspondent Richard Taylor (who you may or may not recall from BBC Click), who didn't exactly hold back when tweeting:

He first blocked DB on Twitter for having the temerity to call him out of that tweet and then, in the usual way, discreetly deleted it.

Meanwhile Hillary Clinton's most faithful BBC sycophant, Kim Ghattas clearly hasn't been taking the ascent of Trump at all went.

She has been very busy today aggressively defending the women's march against Trump against all criticism on Twitter, including laying into Piers Morgan. Other tweets talk impartially about Trump's speech containing "strident nationalism" and his echoes of 1930s fascism. Plus, of course, lots about the 'small' numbers attending the Trump inauguration compared to Obama and the women's march. She didn't like his use of the word "carnage" either. ("Ppl around world listening to @realDonaldTrump talking of  "carnage" to describe US must wonder which country he's describing. #superpower?"), Other anti-Trump tweeters get linked to too. Our Kim is not a happy bunny. 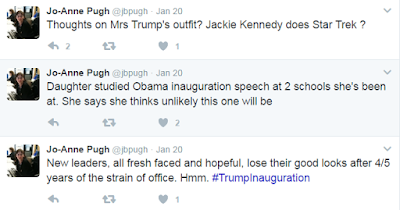 The ever-reliable Rachel Kennedy ("BBC TV News Ed") has been excitedly comparing the size of Trump's crowd with the women's march and linking to lots of anti-Trump stuff, plus adding the odd snarky comment about the new US president. Still, she's had time for a little light relief:

For more of the same, you can also try the Twitter feeds of well-known BBC News Channel presenter Maxine Wawhinney. I don't think she's that keen on Brexit either. Or why not try Rebecca Kesby ("Journalist for BBC World Service and Radio 4. Presenter/reporter. Views mine (or yours)"? Her views are entirely typical for a BBC reporter.
Posted by Craig at 19:50