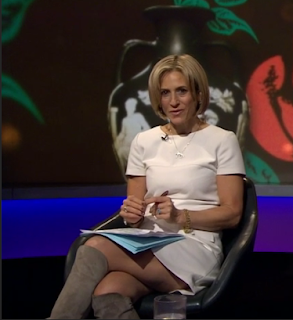 Emily had a 'clarification' to read out at the end of last night's Newsnight. In case you missed it, here's a transcript:

Now, a quick clarification before we go tonight.

On Tuesday we ran an item about the ethics of studios featuring dead actors in movies through the miracle of CGI. In it we said Disney was negotiating with Carrie Fisher's estate about using her image in future Star Wars productions.

Got the wrong end of the stick. Although there have been reports that Disney was considering using CGI to include Fisher in a future production, the studio says "Disney is not in conversations with the estate of Carrie Fisher at this time. Any reports to the contrary are false."

We're happy to correct that. And apologies to any Carrie Fisher fans we excited or, indeed, upset.