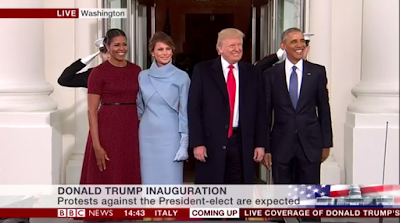 Something is apparently happening in Washington today and it seems as if quite a few BBC journalists are there.

If anything strikes you as being biased about the BBC's coverage of the inauguration of Donald John Trump as the US's 45th president, please let us know.

So out goes 'Blessed, handsome and crooked' (Barack Hussein Obama: Barack being Swahili for 'blessed', Hussein being Arabic for 'handsome', and Obama being Dholuo for 'crooked')...