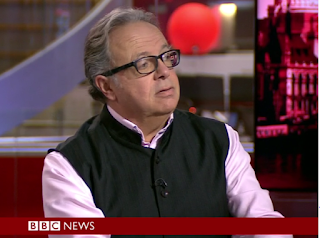 Given that Dateline London has a large global audience, surely it's now  incumbent on its producers to include at least one pro-Trump US commentator among its cast of regulars from now on?

It's no good just having Trump-hating US liberals like Michael Goldfarb and Jef McAllister and no Americans whatsoever sympathetic to the incoming US administration. Otherwise, it's just going to be a Trump-bashing echo chamber every week for the next four years - and fun as some people will find that prospect, it's hardly giving BBC viewers a representative range of world opinions.

People (other than me) are starting to notice, so Dateline urgently needs to mix things up, broaden their spectrum of voices, become less biased.
Posted by Craig at 14:33