I’m getting fed up. I can’t be bothered to write about many things that have been in the news recently, such as the ‘fake sheikh’ type sting, crafted by Al Jazeera to look like an Israeli government plot to sabotage UK parliament .

Even the Guardian’s Michael White, famous for  announcing: “In Israel they murder each other a great deal” Tweeted that it looked to him like a cheap entrapment job, (With a Twitter timeline like that how does he find time to do anything else?) which, amusingly, led to a few fanatical Israel bashers accusing him of being a Zionist.
I can’t even bring myself to mention the decision of a German court that  “Torching a synagogue is not antisemitic”  and I don’t know how (or if) the BBC reported that, but they did mention the Amber Rudd hate incident. Andrew Neill savaged the poor Oxford professor (of physics) who dreamt up that ludicrous allegation.
I know everyone loves Andrew Neill, but in this case the victim seemed too much of a soft target, like a rabbit in the headlights really, who, for all I know did this out of a misguided desire to stand up for the underdog. If you see what I mean.

I won’t even bother to mention “On Your Farm”, aired early on Sunday morning when we were all half asleep. It brought us a Halal farmer, whose religious beliefs were alluded as a kind of ‘given’. You know, PBUH and midday prayers were woven into the conversation as though they were common parlance. The normalisation of Islam by stealth.

I can’t be arsed to mention Radio 4 this morning, which had more than the absolutely necessary quota of Islam-related content and a good dose of overt Trump-bashing. (I wonder if the level of BBC Trump-bashing will continue after the inauguration?)

I won’t even try to tackle Yolande Knell’s reporting about the Paris summit, but I did wonder if Yolande Knell knows anything at all about history pre 1967? I mean who does she think Israel stole captured the West Bank from? And how did she think they came by it?

One thing I will just mention is the Holocaust remembrance edition of the Antiques Roadshow. Of course it was nice that the BBC chose to feature this on a long-running programme such as this, and I thought Fiona Bruce was rather good, her ‘say-it / act-it-out’ style was suitably reined in for once.
However, I will remind you that the BBC has always been fond of recounting tales of the suffering of Jews, as long as it’s purely holocaust-related. One of the artefacts in this episode was a pair of striped trousers. The actual ones. Cynicism aside, it was a very moving film. 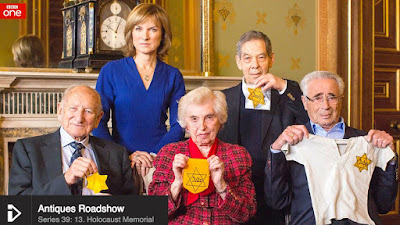 One particular artefact struck a chord. In fact it was Fiona’s favourite. It was a board game, a kind of cross between Snakes and Ladders and Monopoly, where the object was, through lucky throws of the dice, to round up the most Jews and cart them off to the police station. The cone-shaped pieces were painted with ugly faces to represent Jews. Fiona Bruce was shocked that this popular game was designed to inculcate Jew-hatred into German children.

I wonder what Fiona Bruce’s reaction would be if she knew about the Jew-hatred that is being inculcated into Palestinian children as we speak. Through UNRWA, funded by foreign aid. The similarities are undeniable. I’m shocked, aren’t you? 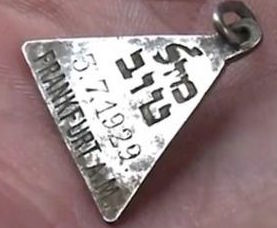 So I won’t mention any of that. Instead, for sentimental reasons, I’ll tell you about quotes and recitations that my father often came out with, (when he was alive) the general theme being absurdity.
One that tickled him came from an old ‘music-hall’ routine by Wilkie Bard:  “I want you to notice my leggings”.
Mad. I think he adapted some of the words.
Another favourite was from Samuel Beckett: 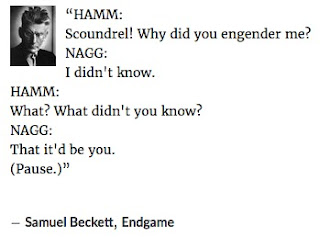 I do like a bit of the absurd, as you’ll guess.