Statements of the bleeding obvious

What did you think of Theresa May’s speech, then? 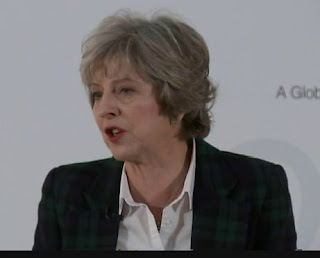 Of the ‘early responders’, one of the first off the blocks was Guido. When I quickly looked on his website there were but a few dozen comments from the below-the-line reception class .They were mostly enthusiastic.

Peter Walker in the Guardian said:
“The more vehement Brexiteers are, as you might expect, generally very happy with May’s speech”.

The pundits kept referring to the ‘meat’ and ‘flesh’ in the speech, but I’m afraid I can’t for the life of me see anything particularly new or unexpected in there, apart from the slightly worrying promise that MPs will have a chance to scupper the deal by voting on the final terms, once they have been reached.

Most of her carefully worded speech sounded somewhat motherhood-and-apple-pie. I mean it’s all very nice setting out what ‘we’ want, but surely the bottom line will depend on what “they” want.

The BBC had Tim Farron on, as they would. Poor Tim looked even more woebegone than ever, and completely taken by surprise that Brexit means Brexit.

Norman Smith must have missed the bit where she said  - for obvious reasons - she was not prepared to give a blow-by-blow account of the negotiating strategy, because he was still complaining that she hadn’t set it out. That’s quite annoying.

Anyway,  She did have a dig at the remoaners, and perhaps the press.

“…………….Because it is not my job to fill column inches with daily updates, but to get the right deal for Britain. And that is what I intend to do.”

By jove I think she’s got it.

It’s a bit too soon to get a full picture of the BBC’s reaction. Craig? What do you think?  Anyway, let's see how things pan out.

Oh, one thing I forgot to mention. One of the commenters at order-order criticised Theresa May’s appearance, saying “At least she could have brushed her hair”


What rubbish! She’s going to be in Vogue! It looked to me as though the image-tweakers and right-on hairdressers had already been busy - creating a flattering tousled look.  It was a good hair day, and I thought she looked great, even though she had that old Black-Watch tartan pants suit on again; the white open-necked shirt looked fine, especially without any of those burdensome clumpy necklaces.
Posted by sue at 16:43