For anyone not watching the Theresa May-Donald Trump press conference, here's a flavour of what you've been missing... 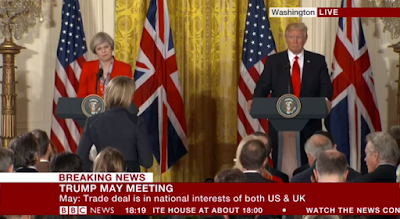 Laura Kuenssberg: Thank you very much, Prime Minister. Laura Kuenssberg, BBC News. Prime Minister, you have talked about where you agree, but you have also said you would be frank where you disagree with the President. Can you tell us where in our talks you did disagree, and do you think the President listened to what you have to say? And Mr President, you have said before that torture works. You have praised Russia. You have said you want to ban some Muslims from coming to America. You have suggested there should be punishment for abortion. For many people in Britain, those sound like alarming beliefs. What do you say to our viewers at home who are worried about some of your views and worried about you becoming the leader of the free world?

Donald Trump (turning to Theresa May): This was your choice of a question? (Audience laughs). There goes that relationship!

This provoked a short Twitter exchange between a Breitbart journalist and a BBC journalist:

Update: It's turning into a tag-wrestling match over on Twitter:

Raheem Kassam, Breitbart London: I agree. Which is why we as a private company have more legitimacy than you as an arm of the British establishment funded by threats.