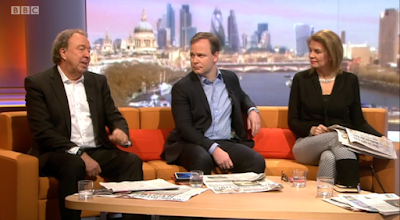 It's got worse for Julia since.

The Remoaners-in-chief she mentioned (Sir Craig Oliver, Steve Richards) have been joined on this morning's Marr by other Remoaners-in-chief: Ken Clarke and Nicola Sturgeon. And Remain-backing Tory Justine Greening is on too. That's a heck of a lot of Remainiacs for just one show!

And just Julia Hartley-Brewer to put the other point of view.

Update: Andrew Marr called Julia H-B a "Brexiteer". (He didn't apply any equivalent label to, say, Steve Richards). Maybe Richard from Pointless should have tweeted him too.

Further update: Andrew Marr's attempt to make the resignation of Sir Ivan Rogers a big item on his paper review saw Steve Richards and Sir Craig Oliver 'big up' Sir Ivan and Julia H-B give him a right good bashing. The section ended with the following exchange.


Julia Hartley-Brewer: He's clearly unfit for the job. His emailed resignation made him clearly unfit for the job. And he should be out of the Civil Service, as he is. Goodbye! Good riddance!
Andrew Marr: We'll hear his side of the story a little bit more from Ken Clarke...
Julia Hartley-Brewer (interrupting): I think we already did, didn't we!
Andrew Marr: ...later on.