Before you read it though, please peruse this (accurate) comment about it from an earlier thread: 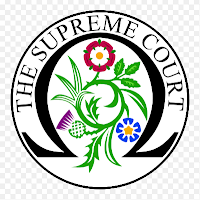 
There were so many bundles of papers submitted to the Supreme Court in the Brexit appeal that if each sheet had been placed end to end they would have stood four and a half miles high.

The hearings and judgment in this remarkable case have felt to me like an abridged version of what happened to our country since the vote said 'Nein danke, non merci, we're off!'.

Back in December, as we gathered for the first day, the court was surrounded by protesters.

One chap had a sign declaring his local council has stolen his taxi licence. (Adopting a mock-Cockney accent) "Britain out! Britain out!", he chanted, virtually non-stop all day.

An Irish dancer - and I use that description with some hesitation - pranced around, wearing a Star of David. 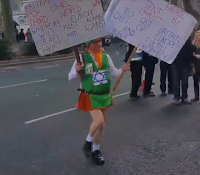 And then there was the menace towards Gina Miller - the investment fund manager and philanthropist who'd partly bankrolled the challenge. She'd endured months of death threats online, By the time this week's judgment was delivered she needed a security escort to and from the building.

In court the scene couldn't have been more different. The Supreme Court is furnished with a remarkable carpet designed by the pop artist Sir Peter Blake. It depicts flowers from the UK's four nations. It symbolises the people coming together under one rule of law. 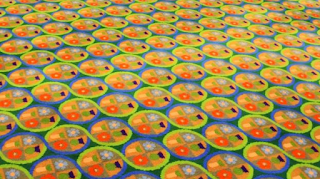 Outside the only way you could sometimes be heard was to shout the loudest, but inside - before eleven justices - everybody would have their turn.

First up had been Jeremy Wright QC, the Attorney General - the government's most senior law officer, "The King is the delegate of the people", he declared. That soundbite meant ministers could use the Royal prerogative - executive powers - to end EU membership on our behalf. And without a great deal of further explanation he substituted himself in favour of James Eadie QC, first Treasury counsel - the government's go-to man when in a tight spot. Now his case appeared elegantly simple: If Parliament hasn't tied the hands of ministers then ministers have the power to trigger Article 50.

But Mr Eadie's route to finding where they tucked away that power was torturous to us mere mortals and then, during Day Two, Lord David Pannick QC, arguably the greatest showman among today's advocates, bound to his feet for Gina Miller. He advanced. He engaged. With one flash of his legal rapier the government's gizzard was on its point. Or at least that's what he wanted you to think. 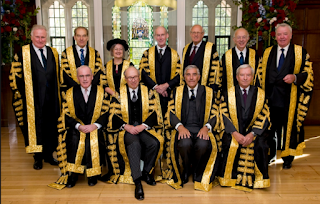 The wily old judges, combined age of 753, know him too well. Lord Sumption - he of the wild, ageing rock star hair - interrupted him after less than two minutes. Lady Hale and Lords Kerr and Mance pounced next. If they hadn't got a word in then they never would. But Lord Pannick - that's spelt with a 'k' by the way, rather than a 'c' - wasn't panicking. He took us on a tour of how constitutional authority had passed from the Crown and ministers to Parliament, And along the way we stopped at a Newfoundland lobster factory and the unpronounceable to De Keyser Royal Hotel - two cases more than a century old.

Those and many other proved one thing: Leaving the EU isn't as easy as, well, to quote an infamous headline from the Sun, "Up yours, Delors!".

Can we untangle the continental genes that have spliced into our nation's DNA? 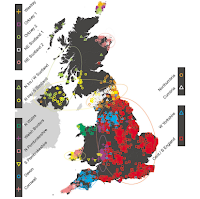 What, for example, was to court to make of devolution. Scotland, Wales and Northern Ireland all have a role in administering EU rules. Did this give their devolved bodies the veto, or at the very least a say?

In the end what mattered was a simple constitutional point. And on Tuesday it took Lord Neuberger, the president of the court, a few clear sentences to spell out that only Parliament could make and break the law that governs our membership of the EU.

Within minutes ministerial advisers were spinning that the result was better than expected. 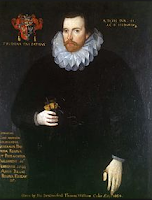 Will this case still matter once Brexit has happened? In the 17th Century Chief Justice Sir Edward Coke put King James I and VI firmly in his place. "The law of the realm cannot be changed but by Parliament", he declared. There was sound and fury from the King but Coke said the rules were the rules.

The Supreme Court's judgment means that Coke's words are still the British way of doing things.
Posted by Craig at 17:44