"One thing that is true of the BBC is of course, you leave all your personal opinions at the door" 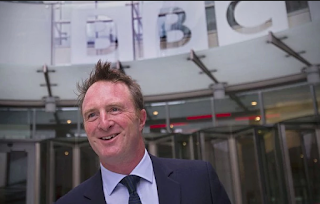 This week's The Media Show featured a remarkable pair of interviews about BBC bias - especially regarding BBC bias against Donald Trump.

The first interview featured Charles Moore of the Spectator, laying into the BBC's 'groupthink' and the corporation's lack of even-handedness when it comes to disputing/believing 'facts' (i.e. questioning figures from the Trump side whilst simply taking on trust figures from the anti-Trump side), plus making the contrast between how the BBC greeted the election of Barack Obama with how it's greeted the election of Donald Trump.

The second interview featured James Harding, Director of BBC News. It was one of those BBC interviews when the senior BBC manager essentially says little other than that 'the BBC is getting it about right'. Even when he sounded as if he was about to concede one of Charles Moore's points, Mr Harding spun around and refused to concede it:

JAMES HARDING  Erm, I think, let me say two things. One is: I think Charles Moore makes a really good point and made a really good point in that article which is, if you're going to have an argument about the honesty of the President of the United States in picking a fight with the media about the size of his audience at the inauguration, then you’d better be as vigorous and as keen to monitor the numbers of people who go on marches. And I think that point is not just related to Trump, it’s related to that bigger issue about public protests and how do you make sure that you, you do that accurately?
STEVE HEWLETT:         So do you think there was an element in the BBC’s reporting . . .
JH:          (interrupting) So . . .
SH:         . . . that could fairly be described as ‘uneven’ slightly?
JH:          No, I just think, I think what that is an extremely important thing is (sic) to keep on reminding people that if you’re going to pick a fight over fake news – and there is a fight on all sides over fake news, then you keep coming back to the efforts you make to be accurate.  That’s a really important point.

Plus, he quite blatantly side-stepped some of Steve Hewlett's sharper questions (or, to put it another way, failed to answer them), eg:

It was a strikingly weak performance, all in all. See if you agree.

A full transcript, courtesy of David and Andrew at News-watch (and many thanks to them for providing it), follows 'below the fold'...