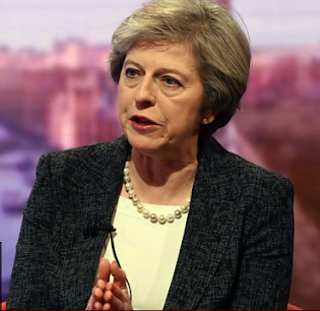 Andrew Marr had an under-par Mrs May on today.

Some people are attacking her for avoiding answering Andrew Marr's repeated tries (four goes) to get her to answer the 'Did you know about the errant Trident missile?' question. Others, like Stephen Pollard, contend that it's "a truly bonkers row". ("How can it be sensible for a PM to say 'Oh, just to confirm, our nuclear defence didn't work'?).

There was also John McDonnell, who answered Andrew Marr's suggestion that he was hearing talk of a Labour collapse in the north of England by replying, "I think you’re talking to the wrong people. I was out on the streets in Brighton yesterday where we had hundreds of people marching to protect the NHS". (Who needs satirists?)

And also Nick Clegg, being asked:

My question for you really, however, is so you’re very clear, you hate the whole thing, you wish the vote hadn’t happened and you’d like to reverse it in some way if you could. But how can you actually have any effect on this? You’ve got nine MPs, you may do very well in council by-elections around the country, how can you possibly change anything?

It seems almost risible to think that a party with nine MPs could suddenly become the main opposition party. But do you see this as such a moment in our national choice, Brexit or anti-Brexit, that there a historic moment for the Liberal Democrats?

This, of course, was Theresa May's first appearance of the year on Andrew Marr, having snubbed the programme earlier and going to Sky instead. I note that she got over 5 minutes less time than Jeremy Corbyn last week. Was that the BBC's revenge?

Also, what do you think of the rather unflattering photo the programme put of Mrs May on their website (featured at the top of this post)? Was that also part of the BBC's revenge?

And was Andrew being rather naughty when he asked?:


Because this [Donald Trump] is a man that Britain both needs but is also incredibly divisive. Your own policy chief, George Freeman, said that the inauguration speech you’ve just praised was ‘deliberately divisive and confrontational and showed the politics of hate,’ and a lot of people agree with him.

Had she "praised" it? Here's what she'd actually said:


Andrew Marr: What did you make of his inauguration speech?
Teresa May: Well, I think his inauguration speech had a very clear message to it, which is the message that he gave during his campaign about putting America first. But if you think about it, any leader, any government, as we do here in the United Kingdom, when we look at any issue we ensure that we’re putting UK’s interests and the interests of British people first.

There was also the Guardian's Trumpophobic political editor and the Trumpophile Piers Morgan on the paper review and Joyce DiDonato being invited by Mr Marr to give her views on the terrible effects President Trump's policies could have on the arts in the US after she'd sung a lovely old American folk song/sea shanty.