The BBC: Devil's advocate and (Her Majesty's) Official Opposition

The following transcription captures the words but not the tone. When I first heard it this morning Sarah Montague sounded more spittle-flecked than she sounded after replaying it for the umpteenth time, which I’m afraid I had to do in order to get it down in writing.

However, there are a bunch of serious misconceptions within Sarah’s questioning that need challenging. I’m not going to extend the length of this post by going into them in detail here and now; I’ll leave that to others, whom I hope will do so in due course.

When the BBC confines its most hostile and adversarial Middle East-related interviews to Israeli spokespersons, which they BBC would likely claim is what their listeners would wish them to do, it looks as though the BBC is acting as the official ‘opposition’ (to Israel) and mouthpiece for Mahmoud Abbas and his merry men.

It has taken on a similar role (that of Official Opposition) with regard to all sorts of issues. In the case of domestic politics this role just might be justifiable in the absence of a credible alternative.
In the case of the Israel/Palestine conflict, however, Israel has enough opposition already - from the Labour Party and from the entire Islamic world; without any help from the BBC.

As long as the BBC continues with this approach, countering every Israeli defence with something said or done by the UN, citing international law and repeating interminable disingenuous Palestinian posturing, this is the only conclusion one can reach. When Sarah Montague goes head to head with this man, ( Hamas MP Marwan Abu Ras) I might change my mind.

“Four minutes past seven. Israel has approved the building of hundreds of new homes on land it has occupied in east Jerusalem.


The settlements are illegal under international law, although Israel disputes that. The deputy Mayor of the city, Meir Turgeman is reported as saying when Donald Trump became US president “Now we can finally build”.
Well, Tzipi Hotovely is Israel’s deputy minister of foreign affairs and a member of Likud Party, good morning to you.

"Five hundred and sixty six new homes approved in east Jerusalem on occupied land, and are we going to see more settlement building now that President Obama has gone?


Of course it is only Israel’s interpretation of international law.


"No, no, this is pure history because in international law and according all the peace agreements that were signed, never said that Israel can’t build on Jewish land and this is definitely a Jewish land.

"Of course as I say the majority of the rest of the world take a very different view, but one thing -clearly you think differently -  but do you recognise that the building of these homes makes peace less likely?

"Absolutely not. What we saw throughout last year was that every time Israel went through a process of concessions and when Israel committed disengagement from the Gaza in 2005 what we saw was more extremists on the other side, we saw Hamas regime taking over - terror regime that the Palestinians choosed on a democratic vote, so what we saw is actually the opposite. When settlements were not there - when Israel was not there, instead of having democratic flourish in the Palestinian side we just saw extremist radicalism and radical Islam taking over. Unfortunately…

"You're talking about a flourish…. flourishing  of a particular one the.. the…. Israeli Jews in settlements, they are flourishing, of course the Palestinians are not.

"Can you ask yourself, how come, after twenty five years (during which) Israel said that it was willing to give the Palestinians a Palestinian State (that it) never happened? Never in history when a minority wanted sovereignty, it refuses to get the sovereignty. Now the Palestinians are unique on this. When you see other minorities in the world that want to be independent - whenever they were offered to have this independency, they said yes. The Palestinians are singling themselves out from this process, this historic process because they said no to every international or Israeli offer,(which) means that this is what they don’t really want. We see leaders that won’t come to negotiate…..

"Do you really believe that Palestinians don’t want their own state?

"Absolutely, because they said no to every Israeli offer and to every international offer. You can ask every American Secretary of State that spend more time in the Middle East than in any other conflict and eventually after so many years, so many offers, so many programmes….

"Well at the moment, unfortunately they prefer Israel’s delegitim(is)ation than having a good life, than having sovereignty, they definitely don’t do any step in order to achieve any kind of agreement because when you want to reach an agreement you usually sit and negotiate. They refuse to negotiate for the last few years.

"No. Israel was in a defend war, because after not accepting any kind of partition, from the UN, from the beginning of the way the state has started, the Palestinians and other Arab states refused to accept the idea of a Jewish state in the Middle East, and this is really the issue.
I think that the international community - you know what? - let me quote Theresa May. Theresa May, your Prime Minister, said in a very clear voice that the settlements are not the main issue.
I think this should be the guiding line for the international community. Everyone has been, ‘dealing with’ the settlements even though everyone knows that the Palestinians, the PLO, was established in 1964 when there was not even one settlement ..

"Ms Hotovely, the arrival of Donald Trump as American President, does it change the way that things operate in Israel - between Israel and the Palestinians? Is it a game-changer?

"First of all we think that we have a true friend in the White House. I think that all the declarations of the Trump administration wear showing a deep friendship to Israel. They understand the complexities of the circumstances in the Middle East, the fact that in a world that everything is falling apart around us, when we see countries that are, basically, are just not becoming countries any more, we saw  that in Syria, Iraq and Yemen all these circumstances that ere creating more and more radical Islamism, where we se that Israel is the only democratic regime in the region they want to keep Israel in its best shape and I think…

"Tzipi Hotovely we must leave it there. Thank you very much.

"We are very happy with the new administration. 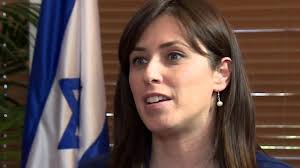