Their watchword? Never let the facts – or niceties such as the journalistic ethics covered in the BBC's Editorial Guidelines – get in the way of a chance to kick this (in their estimation) dangerous buffoon.

...and notes that "the BBC has now abandoned any pretence of impartiality in the reporting of what is sees as ‘populism’":

Is there anything the BBC won’t now do to discredit Donald Trump or figures on the so-called Right? 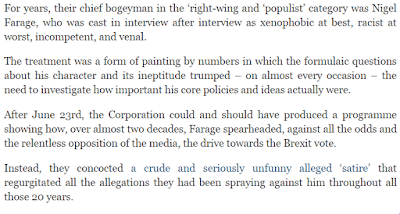