It's worth noting that Sky News tonight is leading with:

...based on Boris's clarification: 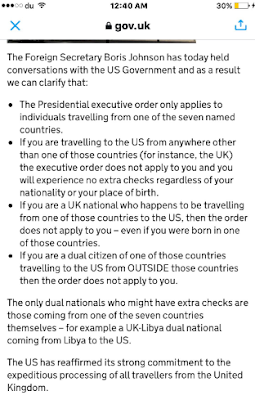 ,..which should take some of the hysteria out of the reporting over here, but probably won't, given that certain other broadcasters, namely the BBC, are doggedly sticking with their own inflammatory agenda: 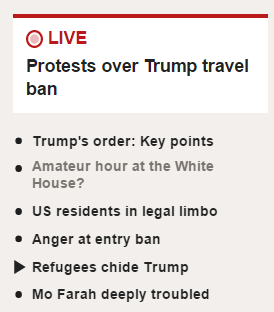 P.S. That 'Amateur hour at the White House?' article may come with a question mark but its BBC author, Anthony Zurcher, leaves his readers in no doubt that the answer is 'yes' and ends by opining:

P.P.S. A Twitter exchange tonight between an MP and a BBC presenter:

BORIS JOHNSON: Statement on what the Presidential exec order on inbound migration to US means to Brit nationals/dual nationals. https://www.gov.uk/government/news/presidential-executive-order-on-inbound-migration-to-us...
DOUGLAS CARSWELL: Seems some of the broadcasters' analysis of the US visa EO issue has been based on the content of their twitter timeline, not facts.
NIHAL (BBC): As someone who has been forthright in your condemnation of "angry nativism" what do you make of Trump's EO re immigration?
DOUGLAS CARSWELL: I'm still finding out about what the new US policy on visas actually means because I cannot rely on broadcasters to explain it.