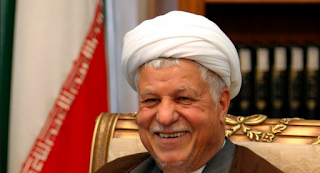 It's intriguing how famous deaths get reported.

My Twitter timeline (self-selected of course) is full of people saying that the just-dead Akbar Hashemi Rafsanjani, 'The Shark', former president of the Islamic Republic of Iran (1989-1997), was the Islamist regime's mastermind at its bloodiest era - a dark age of mass executions, torture and fear - and that Rafsanjani was very much one of the bad guys.

They say they won't celebrate his death, but they won't give his life a good gloss either.

The BBC's main report on his death, in contrast, presents him as a leading revolutionary who became "a counterpoint to hardline conservatives" (which, in the BBC's language, is about as glowing as it gets).

"Influential", "moderating", a "champion" of "moderate causes" are the terms used to describe him in this BBC article.

There's one short paragraph, however, which reads:

He was a man known for a sharp wit but who could also be ruthless.

And that's the nearest the report gets to the kind of criticisms about Rafsanjani's human rights record appearing on my Twitter timeline.

Quite how he was "ruthless" isn't explained by the BBC here.

Was he a bad guy or a good guy? My timeline suggests the former, the BBC the latter. I'm no Iran expert, so what to think?
Posted by Craig at 21:22