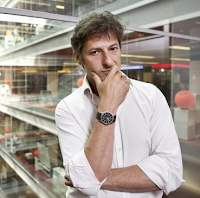 One of the most striking things, for those of us who go on Twitter, is the sheer extent to which BBC types have been reflecting their biased reporting of matters Trump-related in their biased tweets.

I can barely remember all of the ones I've seen, but Newsnight editor Ian Katz's inauguration tweets stand out and left very little doubt about where he stands...

....though his notoriously unsuccessful Guardian campaign to stop George W Bush being reelected in 2004 through a Guardian readers write-in campaign to voters in Ohio was probably already a pretty big clue!.

His concerns on Twitter were to focus on making points about race and making dark links to the fascist 1930s, eg: 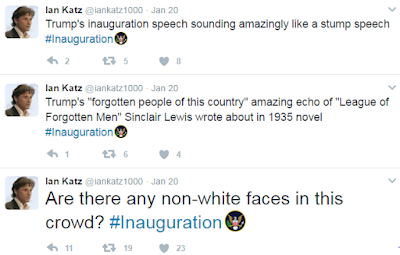 That Sinclair Lewis book, if you're wondering, is a novel about the election of a fascist to the American presidency - something that will have been in Ian Katz's mind when he sent that tweet.

Two of those tweets were directly echoed by Emily Maitlis on that night's Newsnight, with the third tweet's question being put to a race-focused anti-Trump guest. Had Ian suggested it to her? (The Sinclair Lewis one was probably too recherché for Friday night on BBC Two).
Posted by Craig at 19:00