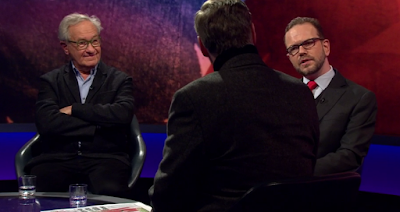 JO'B was as 'impartial' as ever, making an ostentatious show of presenting his anti-Trump/anti-Brexit guests as "experts" (a word he kept on using in that respect) before giving them all ample chance to showboat their anxieties/rage about Trump/Brexit with as little challenge as possible.

In contrast, pro-Brexit and/or pro-Trump guests got the fully sneery JO'B treatment.

First up came, Dr Leslie Vinjamuri (no fan of President Trump), introduced as "an expert in the transatlantic partnership" and asked "this must, professionally, be a fraught time for you?". JOB's questions questioned the importance of the 'special relationship', in the usual BBC way. ("Well, it was a global agenda in one sense. In another sense, the American media seemed a lot keener to ask questions about Mexico and Russia than they did about the other half of the so-called special relationship"; "In the great scheme of things, for all of his Scottish ancestry and what have you, how high up on his to-do list will be giving Britain something?")

Then came Dan Hannan, repeatedly (and sneeringly) called "an arch-Brexiteer" by JO'B. JO'B interrupted him quite vigorously and chose to take advantage of Dan's mention of the "English-speaking" nations to sneeringly imply racism on Dan's part. ("The English-speaking democracies?"' "English-speaking? English-speaking, or would we allow non-English speakers in as well?"). It was classic JO'B.

"In a moment we'll be talking to the foreign affairs expert, Anne Applebaum. But first joining me now from Florida is the veteran Republican political strategist Roger Stone, himself a long term confidante of Donald Trump", said JO'B introducing his next guest.

Mr Stone received the usual JO'B treatment, getting a hostile grilling (for being right-wing) and having it made personal. Here's a flavour:
And the interview ended in a way that, regardless of who's being interviewed, always strikes me as unprofessional - i.e. where the interviewer gives himself the final come-back at his interviewee's expense. and then adds a final sneer before giving thanks:


But not on the dates for arriving in Scotland. Roger Stone. Congratulations on the morning suit and many thanks indeed to you.

And then it was straight onto anti-Brexit/anti-Trump Anne Applebaum and JO'B introducing her by repeating her 'expert' credentials:

I'm joined now by Anne Applebaum, the foreign affairs expert and columnist for the Washington Post.

The interview was gentle and ended with JO'B saying (of Mrs May and Mr Trump):

And finally came a tag-wrestling match with James O'Brien and Simon 'Drama' Schama on one side and pro-Trump prof Ted Malloch on the other.

Impartial BBC interviewing it wasn't. Typical James O'Brien on Newsnight it was. 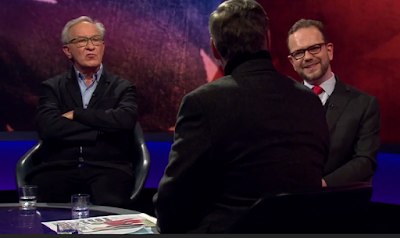 For fans of transcriptions, here's one of the final segment: