“Trump: ‘My cabinet is probably the greatest ever’” 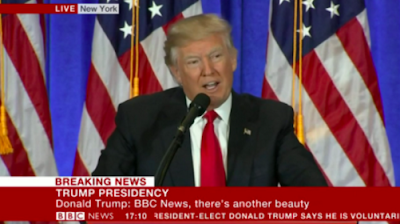 The London Evening Standard's diary piece on the BBC's involvement in Donald Trump's famous press conference. This paragraph struck me as particularly interesting:

One thing that Trump couldn’t control were the deadpan captions on BBC News. “Trump: ‘Inauguration is going to be so elegant’” and “Trump: ‘My cabinet is probably the greatest ever’,” they read, illustrating PEOTUS’s modesty. Their author, the BBC’s Robert Coxwell, told of his temptation to go off piste. “Everyone who’s ever text produced will tell you their fantasies of putting a rude message on the ticker,” he tweeted.

Robert's captions brought him a deluge of praise from admiring Twitterers (including lots of other journalists). Some said he'd "owned" Trump, others "trolled" Trump - and they loved it. It had made them laugh and laugh.

He himself tweeted the following about it: