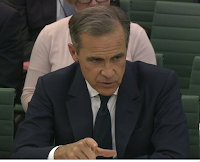 That gushing tribute to President Obama from Nick Bryant on tonight's News at Six was given precisely 3 minutes of prime airtime on BBC One.

In contrast, Mark Carney's remarkable turnabout on Brexit (downgrading its "dangers" and upgrading optimism about the economy) received just less than 9 seconds.

Given the BBC News at Six's extensive and uncritical coverage of Mr Carney's every dire warning about the "dangers" of Brexit in the run-up to the vote and in its immediate aftermath, this skimming-over of the Bank governor's turnabout surely speaks volumes about the BBC's news priorities.
Posted by Craig at 20:05