There was a striking exchange on Thursday night's The One Show following the judges' ruling over Brexit:

Matt Baker: We heard a lot of angry people there in our little film which we've just shown in our studio. A lot of people didn't realise that the actual referendum was advisory and not binding. I mean, did you see this chaos coming?
David Dimbleby: That's what I don't understand. That the government itself said 5 years ago that referendums don't instruct parliament. And that's all the judges said. They said if you're going to have a referendum it's only advisory unless you make it very clear at the time that it's not advisory, that it's one that compels parliament to do something. And they didn't do that.
Alex Jones: No, they didn't.
David Dimbleby: And I don't understand why. It's as though nobody had thought this thing through. It's weird.

Of course, the really 'weird' thing here was that not one of these BBC presenters, including David Dimbleby, mentioned the leaflet which every household in the UK received from the government during the referendum: 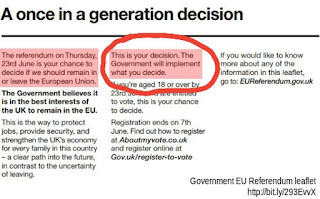 The circled bit (for any passing BBC types who haven't got their specs on) reads:

So that, Mr Dimbleby, is why people thought it was binding. Because - contrary to what you said - the government did tell voters it would be binding. And it kept telling them that. The public weren't being stupid.
Posted by Craig at 19:58

Labels: 'The One Show', David Dimbleby