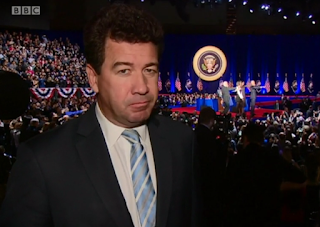 - He's one of the most gifted speakers ever to occupy the White House - the poet laureate of his own presidency.

- Seldom has there been such a photogenic presidency. It had the look of a black Camelot. And the thank you to his wife Michelle left him struggling to contain his emotions, the Great Wordsmith rendered speechless, expressing himself with tears.

- It was presidency that began with the mountain top experience of becoming the first black man to live in a white house built by slaves, but it ended in the valley with the knowledge that Donald Trump will try to dismantle his signature achievements and try to demolish his legacy.

- Barack Obama is a leader who will have the word 'Era' attached to his name, but some will see it as a great failing of his presidency that the name 'Trump' now looms so large.

That "great failing" was the only failing suggested in this gushing 'good bye' from the outgoing president's adoring BBC.
Posted by Craig at 19:43