With a flourish of his pen

BBC One's main evening news bulletin struck a strongly negative note about President Trump's executive order blocking immigrants from a number of countries at the US's borders. Though supposedly an impartial broadcaster, the BBC didn't exactly hide its own view of the matter here. 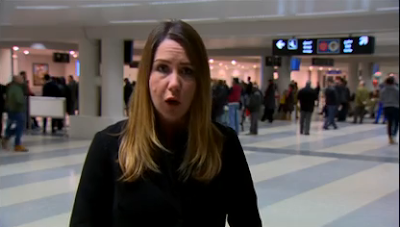 NEWSREADER: As referenced in Laura's report... Lawyers in the United States have lodged a challenge to an executive order - signed by President Trump - which temporarily bans all refugees, and any traveller from seven mainly Muslim countries from entering the US. The ban includes stopping those with a resident permit, known as a green card, from re-entering the country. That order has caused confusion and panic among travellers with some people being turned back from US-bound flights. Alex Forsyth reports.
ALEX FORSYTH: On Lebanon's streets the need is clear. One in four is a refugee who has fled war in neighbouring Syria - some wanting one day to return, others desperate to move on, now all banned from the US indefinitely. And refugees from anywhere suspended for four months. Like Nivine, which is not her real name, a transgender woman persecuted in Iraq who fled to Beirut. She was in the process of being resettled in America. That now, it seems, on hold.
NIVINE: The moment I heard the news my dreams were shattered. My parents want to kill me. I'm terrified they'll find out where I am now. I hoped I'd feel safe in the US, that I'd finally be able to sleep in a country where I have rights and no one could hurt me.
ALEX FORSYTH: With a flourish of his pen, President Trump made sweeping changes to policies for refugees and immigrants, to improve, he said, America's security.
DONALD TRUMP: I'm establishing new vetting measures, to keep radical Islamic terrorists out of the United States of America. We don't want them here.
ALEX FORSYTH: The executive order specifically mention suspending entry from seven countries, with predominantly Muslim populations. People from those areas have taken to social media in confusion. One said an Iraqi friend who fled Isis was turned back from her US flight. And in Qatar a 71-year-old man heading to LA was sent back to Iraq. 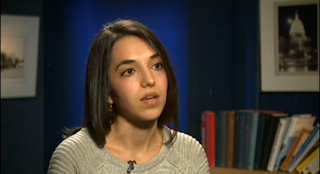 ELHAM KHATAMI (National Iranian American Council): Some green card holders have been let in. I think this was a case-by-case basis in which the family lawyers intervened. We're still waiting on getting more information on that, but in general it's a state of panic and confusion.
ALEX FORSYTH: The extent of this order has enormous implications, not just for refugees but for many from the Middle East no able able to travel to the US. President Trump argues it will improve security but many have condemned the message it sends to Muslim communities around the world. Some refugees who have been detained at airports today are being represented by civil rights groups launching legal action. The full detail of this order may not be clear but already the consequences are being felt and challenged. Alex Forsyth.
Posted by Craig at 20:51