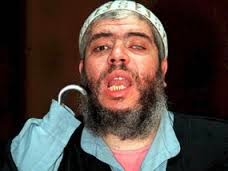 From The Wall Street Journal...

NEW YORK—Abu Hamza al-Masri, an Egyptian-born British cleric, was found guilty of 11 terrorism charges on Monday by a federal jury in Manhattan.
The verdict follows less than two full days of deliberations.
The monthlong trial marks the second time this year that federal civilian prosecutors secured a swift conviction in a high-profile terrorism case. Some critics have contended that military commissions are the more suitable venue for such trials.
Abu Hamza al-Masri, whose real name is Mustafa Kamel Mustafa, faces a maximum sentence of life in prison. Reuters
The verdict was delivered on the 15th floor of the Manhattan federal courthouse with the newly constructed One World Trade Center visible just a few blocks away.
The case is the second of three terrorism cases to be tried in the Southern District of New York in downtown Manhattan this year. In March, Sulaiman Abu Ghaith, Osama bin Laden's son-in-law and former al Qaeda spokesman, was found guilty of conspiracy to kill Americans. The trial of three men accused of helping plot the 1998 bombings of U.S. embassies in Kenya and Tanzania is expected to open later this year.
Mr. al-Masri, whose real name is Mustafa Kamel Mustafa, faces a maximum sentence of life in prison. His defense team argued that the government's case was built primarily on a series of inflammatory statements Mr. al-Masri had made—such as comparing infidels to cows and pigs, and declaring it acceptable to behead and enslave them—during his career as a preacher.
The government's case was bolstered by a number of cooperative witnesses who testified against Mr. al-Masri in exchange for witness protection, government stipends and leniency in their own cases.
Faxes, voice-mail messages and phone records further supported the government's claims that Mr. al-Masri played a central role in a 1998 kidnapping of 16 Western tourists in Yemen, an attempt to found a jihadi training camp in Oregon, and the dispatch of recruits to fight with the Taliban and al Qaeda in Afghanistan.
The trial's climax came when Mr. al-Masri took to the stand in his own defense, a relatively rare occurrence in terrorism trials. He tangled with Assistant U.S. Attorney John Cronan in a combative cross-examination.
"We are gratified that the jury has returned a unanimous verdict of guilt," said U.S. Attorney Preet Bharara, in a statement. "The defendant stands convicted, not for what he said, but for what he did. Abu Hamza was not just a preacher of faith, but a trainer of terrorists."
Mr. al-Masri's Finsbury Park Mosque in London was during the late 1990s and early 2000s, a meeting point for some of militant Islam's most notorious figures. Zacarias Moussaoui, 9/11's alleged 20th hijacker, and shoe bomber Richard Reid, were among those to pass through the mosque.
What Mr. al-Masri, a former manager of a London strip club, lacked in theological learning, he made up for with rhetorical flourish. His two missing hands and glass eye—which he told the court he suffered in an explosives accident with the Pakistani military—also gave the preacher the credibility of a battlefield veteran from the Afghan jihad.
"He looked the part of an angry extremist, and I think that contributed to his prominent profile," said Ghaffar Hussain, managing director of the Quilliam Foundation, a London-based think tank that works to counter extremism.
Mr. al-Masri was an early adopter of the Internet and publisher of one of the first jihadi online Web pamphlets. At a time when other prominent hard-line preachers were lecturing in Arabic, Mr. al-Masri drew recruits from London's disaffected Muslim youth by preaching in English, urging them to take up arms against corrupt Mideast dictatorships, and Western Middle East invaders.
In 1998, his own stepson answered the call, going off to Yemen, allegedly to join Islamist antigovernment insurgents, prosecutors said at trial. His stepson was arrested by the Yemeni government.
Five days later, 16 Western tourists were kidnapped and four were later killed during a botched rescue attempt. Just hours before they were nabbed, however, the chief kidnapper, using a satellite phone Mr. al-Masri provided them, called Mr. al-Masri in London and spoke for seven minutes, according to phone records prosecutors submitted as evidence.
The defense had argued that Mr. al-Masri's communications were aimed at negotiating the hostages' release, but prosecutors said that call and those that followed proved he was an active conspirator in that kidnapping plot.
The following year, some of Mr. al-Masri's followers set off for Bly, Ore., where prosecutors alleged—and jurors agreed—they worked on Mr. al-Masri's orders to establish a training camp to prepare recruits to go fight with the Taliban against the Northern Alliance in Afghanistan.

Abu Hamza found guilty of terror charges in US court19
May 2014 Last updated at 21:1019 May 2014 Last updated at 21:10
Radical Muslim cleric Abu Hamza has been found guilty by a New York court of supporting terrorism.
He was accused of conspiring to aid organisations like al-Qaeda.
Prosecutors said Abu Hamza - born Mustafa Kamel Mustafa - aided kidnappers of tourists in Yemen in 1998 and attempted to build a terror training camp in Oregon.
The 56-year-old, who was extradited from the UK in 2012, had denied all the charges against him.
The Islamist preacher came to prominence in the UK for his fiery sermons outside Finsbury Park mosque; in one he praised the 11 September hijackers.
He was extradited after having been jailed for seven years in the UK for inciting murder and race hate.
In New York the jury of eight men and four women reached a unanimous guilty verdict on all 11 terror charges.
Manhattan US Attorney Preet Bharara said: "The defendant stands convicted, not for what he said, but for what he did.
"Abu Hamza was not just a preacher of faith, but a trainer of terrorists.
"Once again our civilian system of justice has proven itself up to the task of trying an accused terrorist and arriving at a fair and just and swift result."
'Helped MI5'
Prosecutors argued that in 1998, Abu Hamza arranged satellite communications for a group of kidnappers in Yemen who carried out a deadly attack in which four hostages were killed, and that in 1999-2000 he and others conspired to establish an al-Qaeda training camp in Bly, Oregon, among other acts.
He was convicted of various crimes including hostage taking, conspiring to provide material support to terrorists, and abetting religious war in Afghanistan.
During the trial the court heard details of the radical cleric's life.
Before gaining notoriety as an Islamist, he had worked at a Soho strip club in London after coming to England from Egypt in 1979.
He revealed how he lost an eye and both his hands - not, as he had previously claimed, from fighting the Soviets in Afghanistan - but during an accident in Pakistan when liquid explosives intended for use in a road construction project went off by mistake.
His defence claimed he had assisted MI5 "to keep the streets of London safe".
He is due to be sentenced on 9 September where he faces a possible life imprisonment.


The Egyptian cleric known for his fiery sermons could be jailed for life after being convicted on 11 terror-related charges.


By Hannah Thomas-Peter, New York Correspondent
Extradited British cleric Abu Hamza has been found guilty of terrorism charges in the United States.
The radical preacher faced 11 charges in total, including conspiring to set up a terror training camp in Oregon, conspiring to kidnap Americans in Yemen and providing support to terrorist organisations.
At a federal court in New York, the jury convicted him on all counts.
Hamza, whose real name is Mustafa Kamel Mustafa, has already served a UK prison sentence for using his sermons at the Finsbury Park Mosque in London to incite murder and racial hatred.
He was extradited to the US in 2012 and has been awaiting trial since then.
The prosecution said Hamza used the cover of religion to export terror and violence across the world.
In a court room just blocks from Ground Zero, the jury watched an interview in which Hamza celebrated the 9/11 attacks and the hijackers.
They heard him give speeches justifying suicide bombings, the killing of civilians and urging young men to train for violent jihad.
Prosecutor Edward Kim told the court: "His cause was war and it was all consuming ... his goal was simple and it was clear and it was vicious."
The court heard how Hamza conspired to set up an al Qaeda-style training camp in Bly, Oregon, without ever setting foot in America.
Inspired by his sermons, a Seattle-based follower called James Ujaama thought the remote area with permissive gun laws would make a perfect training ground for fighters intent on waging holy war.
He wrote in a fax to Hamza that it was "just like Afghanistan".
Ujaama, who served a prison sentence in connection with his role at the camp, but who secured early release in exchange for co-operation with the US government, told the court that Hamza's backing for the camp would be a "star attraction".
He said: "Abu Hamza's view on the physical jihad training was that it's obligatory, every Muslim should engage in it."
Hamza, who told the court he lost both hands in an accident while working as a contractor for the Pakistani military, was also charged with conspiring to kidnap American tourists in Yemen in 1998.
His lawyers argued that the cleric acted as an intermediary to negotiate the release of the hostages.
They also said their client was guilty only of holding offensive views, and revealed in court that during his time in London, Hamza had acted as a kind of consultant to the British intelligence services.
He was often called upon, they said, to use his contacts and ease tensions to "keep the streets of London safe".
They said Hamza, who broke down on the stand while testifying about the massacre of men and boys in Bosnia, was a principled, independent man who was concerned about the plight of oppressed Muslims.
The jury didn't believe that.
When he is sentenced Abu Hamza could face life in prison.


Even the most cursory glance shows the BBC bizarrely using a pro-Hamza/anti-British-biased quote as a sub-headline ('Helped MI5').

The Wall Street Journal is streets ahead of the BBC here.
Posted by Craig at 21:21