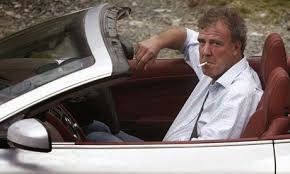 Tonight's The Now Show contained a big surprise - an unexpected defence of Jeremy Clarkson, complete with a sharp attack on both Labour's Harriet Harman and the Daily Mirror (yes, Daily Mirror, not the Daily Mail!) from Radio 4 comedian Jon Holmes.

Yes, of course, he also included a dig at Michael Gove and, yes, this could be taken as a BBC comedian giving the BBC a helping hand by backing one of its most profitable cash cows and, yes, there are a fair few holes in his 'logic' here, but I think it's worth transcribing in full for your entertainment and edification.

So the man who says this..."in the world"...is the most evil man in the world?

"Eeny, meeny, miny, mo, catch a Clarkson by his toe. He says the n-word, he must go"...because the Daily Mirror and Harriet Harman and Piers Morgan and the lefty Guardian and various bleating people on Twitter deemed it so.

Now let's be clear about the word. We're all adults here. We're all grown up of course. It is an offensive word. Many find it appalling, nauseating and downright abhorrent, but get used to us because I'm afraid the word 'Clarkson' has now passed into...[laughter]

'Clarkson'. It's the other c-word. It's only a word, but it has power, doesn't it? It has a history of offence. It's become symbolic of the white man's treatment of minorities on a motoring magazine programme.

The word 'Clarkson', it revolts a great many people, of that there is no question, but where does it originate? Well, let's turn first to etymology. The world 'Clarkson' is derived from the Latin for 'overpaid TV presenter', and no one knows how or when it obtained a pejorative meaning, but we do know that almost midway through the second decade of the 21st Century saying the c-word out loud offends Guardian readers like no other word.

These days many people find the word 'Clarkson' difficult to say. You do often hear it said by those wanting to reclaim it and you hear it on the street, don't you, used as a term of endearment by the Chipping Norton set: "Yo Clarkson. My Clarkson be looking fine in those threads, those too-tight jeans and shirt stretched over your belly, with some fine styling, do you get me?"

What a lot of guff about not much.

I mean last week's n-word furore erupted when a bit of television that was being made for television but wasn't ever on television instead found its ways into the Clarkson-shaped gunsights of his old adversaries at the Daily Mirror, who immediately splashed with it on the front page.

They like a front page, don't they, the Daily Mirror? But at least this time it wasn't fake pictures of British soldiers abusing Iraqi prisoners. No, this time they'd been fed some mumbled footage of a man pointing at cars.

It wasn't broadcast, but that doesn't matter of course cos they don't really care whether Clarkson is racist or not, because it's all to shift copy, right? It's to whip up a twitterstorm simply to sell some advertising on the number of views, right?

"Oooh! Click to watch a man mumbling a rhyme and you've got adverts advertising Mercedes-Benz if you click through, right."

Well done! Attempting to orchestrate the downfall of Top Gear's denim-clad overlord yet cynically cashing in on his fame by plastering a car advert across your pilfered outtake! Moral stance my a-word!!

But what a coincidence that Top Gear has the same sound engineers that worked on Jamaica Inn.

He's not a racist. He's am amiable buffoon who says things that are provocative cos he gets a reaction and it makes him popular.

He's no more objectionable or racist than Katie Hopkins.

She went on Twitter, the modern Twitter....She got all high and mighty. "Anybody who uses the n-word in public or private in whatever context has no place in the British Broadcasting Corporation", she twitted.

Now, leaving aside Harriet Harman's seemingly wanting to thought-police anything anyone ever says, even if in private, what's she talking about?

Is she seriously rejecting the notion of context, right?

Racism has to have context, like the context of discriminating against someone because of the colour of their skin, denying them houses, jobs, food, respect, cos they're not like you to look at.

When Ron Atkinson called a footballer "a lazy, thick n-word" down his commentator's pipe, that was racism. Contextually, he is a racist.

But Clarkson mumbling a child's rhyme? I'm not sure that's the same.

Plus it was on a bit of television that wasn't on television. He wasn't directing it at anyone and the context of him being what James May called him, which is "a monumental bell-head".

Let's face it, some people want Jeremy Clarkson burned in a giant wicker Farage, right, and others handed in a petition to Downing Street demanding that he be made prime minister...

And that could happen. Michael Gove defended Clarkson on Good Morning Britain. (You know, so I'll understand why you haven't seen it!) He said, "It seems to me that this was a word he never intended to broadcast, so I think we should leave the matter there."

Now, it's worth remembering here that in the broadcast version Clarkson changed the n-word to 'teacher', which probably explains Gove's defence. "I actually like the idea of a teacher being caught by the toe and then if the teacher squeals 'let him go' I can fill his place with a cheaper unqualified teaching assistant" [largest laugh, big round of applause].

And there I've said it again. I feel like I'm in a meeting. Hello. My name is Jon. I like Top Gear.