Newsnight presenters, such as Gavin Esler and the fly-by-night Jeremy Paxman, may come and go like the proverbial mayfly, but at least some things are consistent, enduring and predictable - such as Saturday morning being the time when we at "Is" provide you a detailed list of all the subjects covered by this past week's editions of Newsnight, plus the names of all the interviewees featured on the programme. Recently, as you may have noticed, we've added quotes showing how each story is framed - all done, lest you've forgetten, to enable us to build up a picture of Newsnight over time and, thus, be able to track any long-term patterns of bias. Do you spot much bias here?

Monday 28/4
1. The stabbing of a teacher: "A teacher is stabbed to death in a school and the country gasps in shock. An awful tragedy for sure, but does it tell us anything about violence in schools more generally? Should it be the cue for a moral panic about the state of our worst classrooms?" Interview with Chris Dunne, former inner city head teacher & Julian Stanley, Teacher Support Network.
2. Ukraine: "As Russians - or pro-Russians - attack Ukrainian protestors in Donetsk we talk to the journalist who was himself kidnapped and beaten up by pro-Moscow separatists. If anyone can tell us who they are he can". Interview with Simon Ostrovsky, Vice News.
3. Max Clifford: "And for once the man who spoke and spun for a living is silent...{clip of Max Clifford outside court}...Does the conviction of Max Clifford vindicate the pursuit of old men for the sex crimes of their middle age and youth?" Interview with Liz Dux, Slater & Gordon lawyers & Sue Douglas, former 'Sunday Express' editor.
4. Legacy of the Vietnam War: "And the American Vietnam war veterans who left children behind them when they fled go back there to find them."
5. HS2: "The House of Commons has voted tonight...we don't have the result yet...but it's pretty much a foregone conclusion that it will decide to spend vast amounts of public money on a new railway line known as HS2. £421/2 billion...though ministers hope it might come in even cheaper."
6. Old newspaper front pages: front pages from 1914, 1814 and 1714
[closing credits: Ralph Fiennes reads Sonnet 129].

Tuesday 29/4
1. By-election speculation: "You wouldn't imagine things could get much better for UKIP but then tonight they did. A Conservative MP, discredited by sleaze, steps down forcing a by-election the party reckons it may be able to win...{clip of Patrick Mercer}... We'll ask if that ex-soldier just stuck a bayonet in the guts of his own party". Interview with Barbara Roche, Chair, Migration Matters & Patrick O'Flynn, Director of Communications for UKIP.
2. Defeating cancer: "Our chances of beating many forms of cancer have improved hugely, but is the emphasis on defeating the disease though starving other illnesses of resources?" Interview with Professor Karol Sikora, Cancer Partners UK; Kris Hallenga, founder of CoppaFeel!; & Dr Doug Brown, Alzheimer's Society.
3. Obama's foreign policy record: "President Obama rounded off a visit to the Far East today by trying the defend the way he deals with the rest of the world. 'Soft' and 'consistent' seem to be his theme. There could hardly be a greater contrast to his predecessor George Bush's eagerness to send soldiers to Iraq or Afghanistan. Yet Obama stands accused of failing to appreciate the mood of Russia and, most conspicuously, failing to do anything in Syria. As he approaches the end of his time in the White House  Obama is obviously thinking of his reputation, aware of how many people see him as a disappointment." Interview with Marie Harf, Deputy Spokesperson, U.S. Department of State.
4. City greed: "This shows one single stock market share being traded right around the world in half a second by a computer. Will we look back soon fondly on the mere greed of the city trader?" Interview with Michael Lewis, author of 'Flash Boys'.
5. Modern art: "Now if you're the sort of person who thinks the old or Young British Artists were or are a bunch of charlatans, here's a treat. The feted American artist Julian Schnabel has a new exhibition in London. It's been greeted with some mixed reviews. 'Irrefutably awful' in the words of the Daily Telegraph and 'utterly dreadful' according to the London Evening Standard. But as the artist and film director told Stephen Smith. 'Don't people have a sense of humour?'" Interview during report with Julian Schnabel.
[closing credits: Harriet Walter performs Lady Macbeth from Act 1 Scene 5 of 'Macbeth'.] 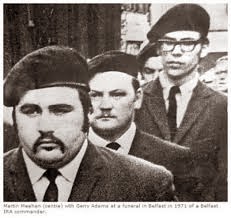 Wednesday 30/4
1. Gerry Adams: "The president of Sinn Fein is arrested tonight in connection with the murder of a woman killed by the IRA in 1972. We'll have the latest". Interview with Peter Taylor, journalist and documentary maker & Alex Maskey MLA (Sinn Fein).
2. Social inequality: "How society is dividing into a vast number of have-nots and a very small number of have-lots-and-lots-and-lots. Why social inequality is predicted to get worse and what, if anything, we ought to do about it. We speak to the French economist who's written what's been called the 'Das Kapital' of the 21st Century". Interview with Thomas Piketty, author 'Capital in the twenty-first century'.
3. Inequality in the UK. Interview with Stella Creasey MP (Labour); Lord Lamont, former chancellor (Conservative); & Gillian Tett, Financial Times.
4. Abducted Nigerian schoolgirls: "Now you may recall hearing a couple of weeks ago that more than two hundred girls had been abducted in the middle of the night from their boarding school in Nigeria. There's not been much coverage since and, indeed, there doesn't seem to be much action to rescue them either." Interview with Abaobi Tricia Nwaubani, novelist and journalist.
5. Salmon Rushdie affair: "The 25th anniversary of the fatwa pronouncing death on Salman Rushdie. Martin Amis on freedom and fundamentalism." Interview with Martin Amis, author.
[closing credits: Simon Callow performs Prospero's 'Our revels now are ended' speech from 'The Tempest'.]

Thursday 1/5
1. Gerry Adams: "Gerry Adams is still being questioned by police in Northern Ireland over the death of Jean McConville 42 years ago. Tonight Jean McConville's daughter tells us she is sure he was involved in her mother's death and tells us she's ready to name names". Interviews with Helen McKendry, daughter of Jean McConville; Kathryn Stone, Victims and Survivors Commissioner; & Peter Hain MP (Labour), Northern Ireland Secretary 2005-07.
2. A post-antibiotic era?: "Antibiotics once protected us from infections that killed. The World Health Organisation says that that era is over and even a scratch could now be fatal." Interview with Dame Sally Davies, Chief Medical Officer for England & Professor Jeremy Farrar, director, Wellcome Trust.
3. Rent cap: "'Unless we build more houses price will quadruple and we'll face a historic drop in home ownership'. That's the warning today as Ed Miliband pitches for the votes of the Renting Generation".
4. Football and 'harnessing your inner chimp': "And why taming the inner chimp could be the answer to England's perennial penalty shoot-out heartbreak".
[closing credits: clips of politicians getting egged]

Friday 2/5
1. Ukraine: "31 people have died in western Ukraine.  A building held by pro-Russian gunmen is set on fire. How can Kiev avoid a violent retaliation from the Kremlin?"
2. Gerry Adams: "When a war ends without a winner you don't usually get to arrest the enemy, though why is Gerry Adams about to spend a third night in custody? Was there an assumption the price of peace was whitewashing the past, and if that no longer applies what does that mean for peace itself?" Interview with Baroness O'Loan, police ombudsman for Northern Ireland 1999-2007.
3. AstraZeneca: "If £63 billion is not enough what will tempt UK pharmaceutical company AstraZeneca to give into the advances of the American Viagra maker Pfizer?"
4. Abducted Nigerian schoolgirls: "Where are they?  More than 200 teenage girls were abducted by the terrorist group Boko Haram a fortnight ago..." Interview with Gordon Brown MP (Labour), UN Special Envoy for Global Education.
5. Will Self on 'the death of the serious novel'. Interview with Will Self, novelist.
[closing credits: "And the big internet mystery of the day" (something about YouTube)]
Posted by Craig at 11:34