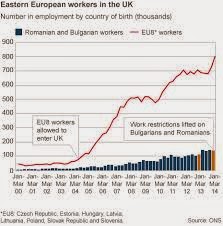 A funny thing happened yesterday ('funny' in the Marcus Brigstocke sense of the word that is).

What I noticed was that the 4,000 figure was leaped upon with some gusto by the left-liberal wing of the media (e.g. the Guardian and the Independent) whilst being reported as if through gritted teeth by right-conservative parts of the media (e.g. the Daily Telegraph and the Daily Mail), who made rather more of the large yearly figure in their less-prominently-placed articles.

Yes, the left-leaning press were definitely giving the story - and that 'Q1 drop' angle especially - a greater prominence/importance/credence than the right-leaning press....

....and the BBC was, as you might expect, much more in the former camp than in the the latter one here.

It was high on the BBC website's running order, it was discussed on PM and it led Newsnight, plus star BBC reporters like Nick Robinson and Mark Easton made hay with it throughout much of the day.

So it's not hard to understand why the Guardian and Independent would be crowing (as they are doing) over that dip of 4,000 people, and why they are claiming that it's proof of 'scaremongering' by the right-wing press, some Tories and UKIP, who claimed large numbers of immigrants from Romania and Bulgaria would start coming from January 1st.

Now, of course, they might still well do - and, maybe, already are doing.

That 4,000 figure may, as Conservative MP Mark Reckless said on Newsnight last night, be "meaningless" as its an extrapolation from a mere five people being asked a question and has a massive margin of error.

Plus there's likely to be a lot of 'hidden' Romanians and Bulgarians not included in this figure (which only measures people in paid work, not their families or the self-employed, or non-workers).

Plus the great tsunami from the 2004 accession countries took time to arrive. It was not instant, with only a smallish rise in numbers in the immediate aftermath of the lifting of restrictions.

I would still wager my blogging reputation on Migration Watch's prediction of an average of 50,000 a year over five years being the best bet, but we won't know that for another five years or so.

Still, it's not hard to understand why the Guardian and Independent are crowing. Many people (including me) didn't expect a drop since January 1st 2014 in these much-anticipated figures. (And I've seen comments on certain other blogs that show I'm not alone in expecting something very different to have happened!)

But what of the BBC specifically? Here's a flavour of how they introduced the story. Would you call it 'crowing'?:


Mark Easton: On New Year's Day, construction worker Victor Spiresau was greeted by politicians, reporters and photographers at Luton Airport - the first Romanian immigrant to arrive in Britain after the controversial lifting of employment controls on Romania and Bulgaria. Victor became the reluctant symbol of what many predicted would be a vast wave of East Europeans flocking to the UK. MPs and newspapers warned of a "flood" of hundreds of thousands of poor Romanians and Bulgarians who would strain our welfare system and public services. It was an argument that played directly into anxieties about immigration and the influence of the EU. But today's figures, the first official estimate of workers from Romania and Bulgaria since the transitional employment restrictions were removed on the so-called A2 countries in January, suggest there has been no flood. If anything, the reverse.

Nick Robinson: Well, well, well. So much for those predictions of a flood of immigrants coming from Romania and Bulgaria once the door to the UK was opened - ie after visa restrictions were removed on 1 January this year.

Eddie Mair: After all the hype, how many Romanians and Bulgarians have come to the UK to work so far this year?

Jeremy Paxman: Great numbers of Romanians and Bulgarians predicted to come to Britain seem to have decided they'd rather stay at home. Or maybe they were never going to come anyway, or maybe they're planning to come later. But the figures do not show the huge surge of European immigrants predicted by some. What lessons should we learn of the politics of immigration and this country's attractiveness - or not - to migrants?

But, credit where credit's due, all the coverage I've read, seen and heard has [following those introductions] presented a much more nuanced and balanced take than you would get in the Graun and the Indie - though anti-UKIP Nick Robinson again grabbed the opportunity to bash UKIP, concluding: "However, today the questions will be for UKIP who warned of a flood of new immigrants from the two countries".]

I thought, for example, that Eddie Mair was pretty assiduous in detailing why the 4,000 figure should be treated with caution and he also gave his pro-mass-migration guest a slightly tougher ride than his pro-a-reduction-in-migration guest. Similarly, Jeremy Paxman was tougher on the Hungarian socialist EU commissioner Laszlo Andor (and asked him some excellent questions) than on Mark Reckless MP (who made a very good fist of explaining that figure away - even Jeremy Paxman seemed impressed!). Even Chris Cook's Newsnight report wasn't too bad either. (I expected much worse).

Now, this is all very fine coming from me, sitting here in Is the BBC biased?'s luxury penthouse headquarters atop Morecambe's glittering, glorious Polo Tower....

...sitting in judgement on all manner of media types, trying to be fair, but who was it who said he was going to leave some Bulgarian wine outside his back door for the hordes of Romanians and Bulgarians (and especially their Roma elements) just before New Year?

Er, it was me. Like many another blogger, I expected an immediate flood of immigrants from those two lovely countries in advance of the much-larger tsunami to come (like after 2004).

I must remind you though...moving on swiftly...that while the likes of Nick Robinson, the Graun, the Indie & Co are mocking Nigel Farage over the prediction of 350,000-400,000 immigrants from Romania and Bulgaria, that prediction wasn't much different from the one made by Newsnight.

As you may recall, the BBC's Sanchia Berg said their survey found that 1% of Romanians and 4.2% of Bulgarians were looking for work in the UK. She described those as small numbers, but if you translate them into actual numbers (1% of the Romanian population is 153,00 people; 4.5% if the Bulgarian population is 196,000), the total came to nearly 350,000 people - considerably more than Migration Watch predicts, and on a par with what UKIP predicted.