Goings-on in the People's Islamic Republic of Tower Hamlets 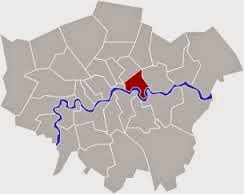 I see that the perfectly proper goings-on in the People's Islamic Republic of Tower Hamlets, where Sheikh Luftur Rahman (the district's founding father) won re-election with 99.2% of the vote, have finally caught the attention of the state broadcaster of the former colonial power (Great Britain).

'Comical John' said that everything was for the best in this best of all possible boroughs. There was nothing to see here. Move along, move along.

Eddie went for him like a West Highland Terrier with novelty false teeth.

Now, to me - a plain-speaking, black-pudding-loving Northerner who never goes to Blackburn, Burnley or [God forbid!] Bradford [in Yorkshire, pah!] - such allegations, if true, are wholly remote from my experience.

Yes, folk in Lancashire it's true [in the Jeremy Bowen sense of the word] may occasionally cheat in cheese-rolling competitions and have been known to intimidate fellow ferret-racers in ferret-racing competitions, but claims about this kind of thing seem kind-of incredible to me.

For example, it's reported that police officers are actually stationed outside every polling booth in the People's Islamic Republic of Tower Hamlets to prevent voter intimidation. Just think of that!

Well, all I can say is that it makes you glad to live in Britain, it really does. That sort of thing would never happen here, thank God!

Going back to the BBC though, there were two curious things about both the Today and the PM accounts though which caught my attention today: (1) the way all the speakers [at least in the clips broadcast by Today] refrained from naming the candidate benefiting from the alleged intimidation and illegality and (2) the absence of the name 'Luftur Rahman' from both of the BBC pieces.

If so I would like to state that the last-paragraph-but-one in no way linked Sheikh Luftur Rahman (may He live for a thousand years) with the BBC's allegations in any way shape or form. Not that that even needs saying, obviously, of course, it goes without saying, and perish the thought.

In matters completely unrelated then, Yapping Alibi-Groan's Independent has boldly gone where no BBC Radio 4 programme has gone before today, and given us the full allegations made by one of the people the BBC interviewed today.

...unlike the BBC News website's report on the story, which is about as revealing as an official Saudi strip-tease act - a 'Nothing to see here' piece if ever there was one. [Really, please just read the Indie article and the BBC article and let your jaws drop at the difference.]