The Piketty Affair rumbles on

This week's More or Less weighed into the heavy-weight spat over left-wing French economist Thomas Piketty's use of stats in his bestselling tome Capital in the 21st Century.

Prof. Piketty argues that capitalism inevitably leads to increasing levels of inequality and that a progressive wealth tax is needed to tackle this problem. People may have vigorously disagreed with his solution but no one doubted his data, which was universally praised as being of great value and taken as being true...

...until Chris Giles, economics editor of the Financial Times, did what no one else had thought to do and examined those much-trumpeted data sets. He found them seriously wanting.

His article sent Prof. Piketty's many opponents on the Right (like me) into a delirium of delight and many of his admirers on the Left (like Paul Mason) into a sour frenzy of defensive rebuttals. The Spectator gloated; the Guardian glowered.

What happened next? Well, Thomas Piketty entered into debate with Chris Giles and vigorously defended both himself and his data, while Mr Giles stuck to his guns. The debate goes on.

Looking at the UK media coverage though, the balance of the debate seems to be swinging back the Frenchman's way, though not all the way. [See Howard Reed in the Guardian and the Economist's 'Free Exchange'.] Tellingly, the initial 'glowerers' keep talking about the story while the initial 'gloaters' have gone rather quiet on the subject (except me!). 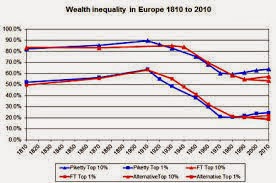 More or Less, hosted by Chris Giles' colleague at the FT Tim Harford, seemed to come to pretty much the same conclusions as Howard Reed and the Economist - namely, that the flaws, such as they are, in Prof Piketty's data sets, aren't serious and that his interpretation of that data [though not necessarily the political consequences he draws from them] remains broadly correct.

In other words, it came down - broadly-speaking - on Thomas Piketty's side, evidenced by the programme's trajectory - from Chris Giles to Thomas Piketty's rebuttal to left-leaning Australian economist Justin Wolfers' closing verdict.

Is that down to left-leaning bias on the programme's part or simply because that's just where the story is at the moment? From the looks of things, it's the latter.

Where will this deeply politically-charged statistical row go next? Are the Frenchman's supporters now the ones gloating too soon?

Well at least his use of data is being closely examined now and not simply taken as sacred text, and that's got to be a step forward for everyone.

[More on More or Less later but it's a sunny Saturday morning, so it will have to wait.]
Posted by Craig at 08:13