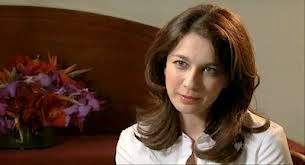 Last night's Newsnight led with the overwhelming victory of Narendra Modi, the BJP and their allies in India's general election.

They persisted with the "Modi is such a controversial figure" line that the BBC has been pushing so vigorously over the last few weeks, and rather nailed their own colours to the anti-Modi mast by inviting the strongly Islamophilic, left-leaning, Western-bashing, Palestinian Solidarity Campaign-supporting historian William Dalrymple to present their main report on the story.

Mr Dalrymple's report may have featured a fair sample of 'talking heads' but his commentary was deeply loaded against Mr Modi. Anyone who knows William Dalrymple's work will have expected that, and so would Newsnight.

In the studio presenter Yalda Hakim then interviewed Mr Dalrymple and journalist Swapan Dasgupta. That provided a measure of balance in that we were now getting a two-sided debate, though - in a classic example of bias by labeling - Yalda introduced William Dalrymple as "one of the keenest observers of Indian life and history" while introducing Mr Dasgupta as a "Modi supporter" [Mr Dasgupta is, in fact, an award-winning journalist who tilts rightwards politically, being a fan of British Conservatism].

Their discussion was interrupted for an interview with sculptor Anish Kapoor, a Modi hater who wrote that letter (along with lots of other left-wing Modi haters) to the Guardian denouncing Mr Modi in the strongest terms. In Yalda Hakim's introduction to this interview, she called Mr Modi "one of India's most divisive politicians" [despite the fact that he seems to have united most of India to vote for him!!]. Mr Kapoor was vicious about the soon-to-be prime minister, calling him "a mass murderer" and speaking sourly of "supposedly democratic politics" in India.

Still, then came an interview with the Green Party leader Natalie Bennett. Frankly, it's the first time I've ever felt sorry for the Green Party. Yalda was absolutely unrelenting in her interruptions. She was like Jeremy Paxman/Andrew Neil/John Humphrys on speed. Quite what's to be gained by interviewing someone like that (except a name for yourself as an interviewer) beats me. Still, at least she can't be accused of pro-Green bias.

Then came one of Ian Katz's trademark all-female panels to discuss one of Ian Katz's trademark issues - sexism. (Yep.) The boss of the Premier League sent a friend a private e-mail that has got the ranks of the easily offended up in arms. (No, he didn't use the n-word). Two women in the studio were aghast at his sexism, Claire Fox of 'The Moral Maze' was aghast at all the fuss. (2 against 1).

Update: I don't think Rod Liddle was very impressed with last night's Newsnight. "It was bad on a whole new level of badness", he said.


Presented by an Afghan-Australian woman called Yalda Kasem, of whom I had never heard. Yalda was hampered in her presentational debut by being unable to string a sentence together; nor did she have the knowledge or acuity to ask interesting questions of her guests.

Mind you, she’s quite fit. And yes, that would be a sexist observation were it not for the fact that I cannot fathom any other reason the lass was presenting the BBC’s premiere news and current affairs show. Well, ok, I can think of one, but let’s not go there.