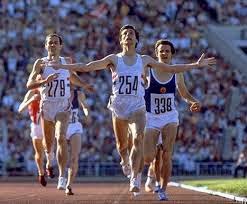 ITV's Tom Bradby had something of a scoop today when 'a senior government source' told him that Sebastian Coe is "the clear front runner" [just like he was in the 1980 and 1984 Olympics] to take over from Chris Patten as Chairman of the BBC Trust.

There are a few hurdles left to clear and obstacles that can be placed in his way, but I am told he is interested and that he enjoys the firm support of the Prime Minister and the Chancellor. Given that this is basically a Number Ten appointment, that should more or less settle it.

It's a little more complicated than that of course.

There's an awful lot of politics (of the Conservative-Labour variety) there, isn't there?

What if the BBC and the government were to choose from outside the political elite/establishment box though?

I admit it's vanishingly unlikely [100% unlikely in fact] but, were it to happen, I'm officially ruling myself out of contention, here and now. I'm too politically partisan [as some of my recent posts probably made clear].

Sue, on the other hand, isn't politically partisan at all [well, not in a party political way anyway]. She would make a great Chairwoman of the BBC Trust.

Unfortunately, I have a feeling that she might be a little too busy to take it on, but we can all keep our fingers crossed nonetheless, and - if it happens - don't forget: You read it here first. (And so much then for Tom Bradby and his so-called 'scoops'!)
Posted by Craig at 21:31