A new-to-me category of the online BBC website is titled “BBC Trending” This article looks like little more than a gratuitous attempt to garner and gloat over the Israel-bashing and holocaust-denigrating comments that are bound to follow barely hidden under a threadbare cloak of *innocent face* concerned ‘inquiry’. Creepy and mischievous. The comments below the line illustrate the inevitable. 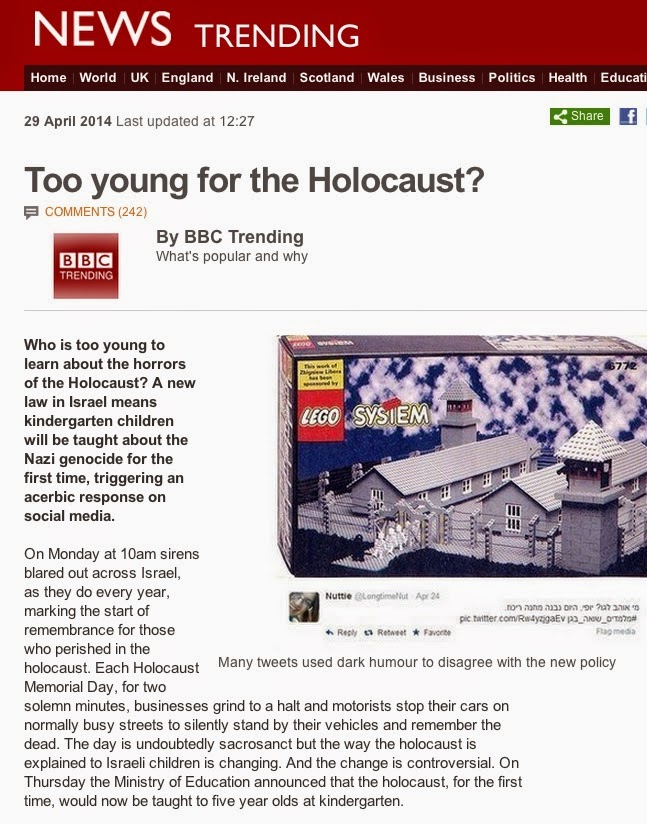 “ Who is too young to learn about the horrors of the Holocaust? A new law in Israel means kindergarten children will be taught about the Nazi genocide for the first time, triggering an acerbic response on social media.”
gasps the first emboldened paragraph, masquerading as sugary concern for the innocence of childhood.  Whatever triggers an acerbic response on social media is of interest to the BBC. If it’s related to Israel.

The article gives a brief description of how holocaust remembrance day is marked in Israel, then:

“The day is undoubtedly sacrosanct but the way the holocaust is explained to Israeli children is changing. And the change is controversial. On Thursday the Ministry of Education announced that the holocaust, for the first time, would now be taught to five year olds at kindergarten.”

I have no idea how children in Britain are taught about the holocaust, at what age, or indeed if they are necessarily taught about it at all, but bearing in mind the things to which five-year-olds are regularly exposed, from CGI films made for children to Grimms Fairy tales, feigning shock and outrage at this is disingenuous and inconsistent.

It’s not even as though BBC Trending has gone into any detail over the substance of this new law. It’s framed as though it’s a prescriptive law, and it smacks of force-feeding five-year-olds graphic images, when it’s far more likely to be a tailor made programme tactfully introducing tinies to the reality  of man’s inhumanity to man. Compare this with the Hamas Bunny.

How about BBC Trending inviting comments on a piece about Palestinian cradle-to-grave incitement . The hashtag could be “Teaching Jihad in kindergarten” and they could illustrate it with a shocking Tweet of some artist-inspired ‘death to the Jews’ scenario from the rich pickings readily available on the internet.
Then there could be 242 comments stating: ” This comment was removed because the moderators found it broke the house rules.”