The 'Weak' in Westminster 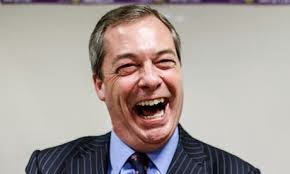 I was idly listening to the Week in Westminster this morning.  Peter Oborne seems to have a soft spot for UKIP. Is he jumping on the winners’ bandwagon? Does he sympathise with Nigel Farage merely because he’s been demonised by Oborne’s media colleagues? Or is it that defending UKIP is a one-size-fits-all easy peasy way of denouncing all current mainstream politics and politicians?

Come to think of it, the system forces all mainstream politicians to toe the party line, and when it comes to inflammatory issues like immigration your common or garden party politician has no alternative but to duck and dive in the way that the public heartily dislikes.

If Ukip ever becomes mainstream, how can it not succumb to the same thing? As soon as they cobble together some coherent policies and assume adult responsibilities they’ll have to present a united front just like everyone else.

When people say a vote for UKIP is a protest vote, they’re quite right. Nigel Farage can still afford to be blunt in the same way that Nick Clegg thought he could promise the earth, that is until he was taken by surprise by the weight of the burden of actual responsibility. We all know that it's not until UKIP gets to be part of a coalition or acquires a proper governmental role that they’ll find out how deliverable or undeliverable their pre-election policies are. Because we know this we might not risk voting UKIP next time round.

If we want to know how to get to the ideal world that many of us want, as the Irishman famously said, we wouldn’t start from here.

The same old problems remain. Mainly, it’s that toxic word racism. The immigration issue has been divided into two because of the need to side-step those ‘stopper’/ death-blow accusations of racism.

The strictly rational argument, that immigrants are taking our jobs, using our resources, draining our economy etc is always answered by seemingly rational counter claims; that immigrants pay taxes, keep our low-paid services running, are of overall economic benefit. That type of argument is permissible because it’s seen as a logical non-racist way of addressing the topic of immigration.

The issue that is impossible to articulate freely without appearing, or actually being racist - is the Muslim issue. The euphemistic “changes to local communities that have come about" that are mysteriously alluded to. What is that really about? For ‘changes’ read Islamisation, but saying so is deemed racist and has therefore been declared out of bounds for nice tolerant British people.

Discussing the reason for UKIP’s poor performance in London, most pundits, even UKIPers themselves, side-step openly stating the obvious truth, namely that expecting voters in an area comprising a 60% immigrant populace to vote for UKIP is tantamount to asking turkeys to vote for Christmas, because saying such a thing exposes them to being declared racist.
However, probably emboldened by UKIP's success, several callers on this afternoon’s Any Answers pointed out, much to the obvious discomfort of the BBC’s Julian Worricker, that London is a lost cause. It’s too late for them. The situation is unfortunate; the problem too big. Too big to fail, like a failing bank.  What most people don’t want is for it to be too late for the whole of the UK.

One politically correct caller to Any Answers said that people outside multicultural areas are simply afraid of the unknown. It’s true, they certainly are afraid of the unknown, but it’s not the unknown unknown they fear; it’s the known unknown, e.g. the underhand shenanigans in Tower Hamlets, the illegal voter intimidation in predominantly Asian areas, the secretive, stealthy Trojan Horse phenomenon, the Islamisation of universities, the things that are quietly changing the face of the country and pulling the rug out from under the feet of ordinary Brits. The leftwing lobby defends the ‘rights' of the so-called indigeny, but only if they’re foreign. Not if they happen to be British.

Even UKIP is afraid to say much of this openly because the term racist has been redefined to cover any generalisation appertaining to any grouping, with or without legitimate, statistic-based justification. All generalising is officially racist, and being thought ‘racist’ disqualifies one from everything. Like being ‘out‘ when you’re playing a game.  “You’re out!” and you can’t play any more.

All the post-election media chatter I've heard has been predictable. The Week in Westminster, Any Questions, Today, and so on.

Peter Oborne’s odd delivery is aggravating, (emphasising random words by spluttering them out after a short pause) but he was fair today, at least he gave all participants a chance to speak.

The fact that they said little or nothing new was disappointing. You’d think at least they’d have the good grace to sound startled after being decisively UKIPped..
Of the media’s campaign to vilify Nigel Farage, Stephen Glover said: “The media class (including the BBC) was as out of kilter with the general public as the political class.”