BBC: another non-scandal, another overreaction 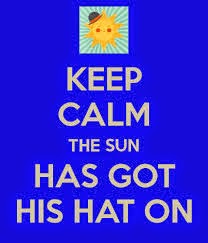 It's a strange thing that Spiked - which rose from the ashes of Living Marxism - is now one of my favourite magazines, publishing some of the most unexpected, intelligent articles around on all manner of subjects. (That I happen to agree with most of their articles probably helps.)

As the following - by Charlie Pearson - is a short article, I'll take the very rare liberty of quoting it in full as its sums up the BBC's 'The Sun Has Got Its Hat On' fiasco to a tee:

There can be no doubting that the sacking of BBC Radio Devon DJ David Lowe last week was poorly handled at best, and straight-up stupid at worst. The veteran local-radio DJ mistakenly played the 1932 version of ‘The Sun Has Got His Hat On’, which contains the ‘n-word’ in the second verse, and was asked to ‘fall on his sword’ by the BBC after offering to resign or apologise on-air.

Lowe himself summed up the situation best, stating that he was ‘compelled to pay the ultimate price’ for falling foul of ‘today’s unforgiving obsession with political correctness’. The BBC have since offered Lowe his job back, but he has declined, citing health reasons related to the fallout from the incident.

The fact that the decision was made after a single complaint makes this story even more shocking. The idea that just one complaint is enough to end a long and blemish-free career reflects the BBC’s inability to deal with even the most minuscule of scandals – indeed, the vast majority of his listeners either didn’t notice or didn’t care.

The disproportionate nature of the BBC’s reaction was hammered home when Weyman Bennett, the president of anti-fascist group Unite Against Fascism (UAF), criticised the BBC for dismissing Lowe. UAF, a group that is plagued by the complete lack of fascism to unite against in modern Britain, has become known for denouncing anyone it could speculate to be racist. The fact that even UAF admits it was an honest mistake shows how bizarre the BBC’s reaction was.

What the whole incident shows more than anything is how alienated the BBC decision-makers have become from ordinary people, who they assume are all irrational, and liable to lose their nut whenever an outdated lyric is aired.