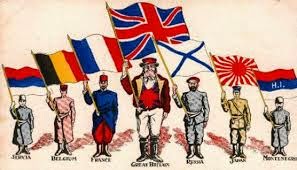 I remember, many moons ago, how bad a reputation the word 'nationalism' had back in my student days (in the 1980s). Everyone agreed [or felt obliged to agree] that nationalism was a 'bad thing', and that its polar opposite - internationalism - was a 'good thing'. (There were universities at the time that contained Young Conservatives, but not mine). 'Patriotism' was a silly concept only held by 'fascists'. The 'nation state' was 'an outdated construct'.

Of course, when some mischievous soul moved the discussion away from British or European or East Asian or American nationalism [so easy for a left-minded student to dislike and dismiss] and onto African nationalism (the ANC) or Palestinian nationalism (the PLO) - or if they were sufficiently left-wing and anti-something-'bad' (the IRA) - those students then began shuffling nervously and admitting that certain kinds of nationalism were OK after all; indeed, soon gaining confidence again, they'd assert they were a 'good thing' - if they took the form of 'national liberation struggles' against wicked, right-wing, pro-Western governments.

I was reminded of this whilst listening to this morning's Something Understood with the BBC's former 'Mark Tully in Dehli' correspondent, Sir Mark Tully. The theme of the programme was 'Nationalism' and Sir Mark just oozed liberal angst over the subject.

Next came the pro-internationalism stuff, with Virginia Woolf preferring to think of herself as a citizen of the world and The Police (the band, not the police service) singing about the need for internationalism.

Ah but what about the 'good' kinds of nationalism?

Well, there was Ngugi wa Thiong'o denouncing cultural imperialism in Kenya from a left-wing African nationalist perspective backed up by a pan-African-nationalist song from Youssou N'Dour.

A good portion of the programme was given over to an interview with historian Ananya Vajpeyi, who came to a conclusion that liberal-minded BBC types like Sir Mark Tully can live with: "India is an example to the world of how people of different religions, ethnicities and cultures can live side by side in one nation."

She argued that India's independence fathers and mothers didn't want a European-style nation state-based nationalism, and neither (clearly) did she.

It crossed my mind that  so much time was spent arguing against a certain kind of nationalism in India in this programme that Sir Mark Tully must have had in mind present events in India where a 'Hindu nationalist' - very much the 'wrong kind of nationalism' - looks likely to win the general election there. Without naming Mr Modi and the BJP, Sir Mark and Ananya Vajpeyi could - and did - reject Mr Modi's kind of nationalism as unfit for India.

That was certainly BBC liberal bias in action.

Still, the programme did include a modest defence of nationalism from Pope John Paul II, which argued for "a positive side to nationalism, if people search for what they have in common rather than stress what divides them", and there was some wonderful music - including two of my favourite pieces (Vaughan Williams' Five Variants on Dives and Lazarus and Carlos Chavez's Sinfonia India.)

And it got me thinking, which is something Something Understood is meant to do.