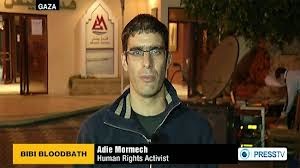 Further to our piece Free Gaza Propaganda, Hadar at BBC Watch has posted her own take on the same story, entitled Mainstreaming extremism on BBC Radio 4.

If you recall, Radio 4's The Listening Project chose to broadcast a loving conversation between a hardcore anti-Israel activist and his mum.

Radio 4 chose not to tell its listeners that Adie Mormech is an anti-Israel activist. We at Is the BBC biased? had to discover that for ourselves, thanks to our good friend, Mr Google (an invaluable friend when it comes to checking out who is that the BBC has chosen to broadcast at us).

We showed that most of Adie's adult life seems to have been given over to anti-Israel activism and that he's far from being the wanderlust-driven innocent he and his mum presented him as being on that edition of The Listening Project - an edition where he took the opportunity provided to him by the BBC to vigorously smear Israel.

Hadar has now pursued the same path and discovered an astonishing appearance by Adie Mormech on Iran's Press TV (one of several in fact) - a rant where he goes so far as to blame the rise in cancer in Gaza on Israel.

Hadar draws the following conclusions from this:

But as we see, Adie Mormech’s extremism has been repackaged by the BBC into a whimsical mother and son anecdote and archived by the British Library as part of “a collection of voices capturing a unique portrait of the UK in the second decade of the millennium”.

Notably, whilst the BBC has shown interest in serious reporting of the subject of extremism in the form of British Islamists travelling to fight in Syria, it not only continues to ignore the extremism of organisations such as the International Solidarity Movement, the Free Gaza Movement, the Palestine Solidarity Campaign and the BDS campaign, but repeatedly lends its voice to the mainstreaming of those organisations and others with similar extremist ideologies.

Sue and I are intrigued by how this all came about though.

The BBC describes The Listening Project in this way:

The Listening Project is a Radio 4 initiative that offers a snapshot of contemporary Britain in which people across the UK volunteer to have a conversation with someone close to them about a subject they’ve never discussed intimately before. The conversations are being gathered across the UK by teams of producers from local and national radio stations who facilitate each encounter. Every conversation – they’re not BBC interviews, and that’s an important difference – lasts up to an hour, and is then edited to extract the key moment of connection between the participants. Most of the unedited conversations are being archived by the British Library and used to build up a collection of voices capturing a unique portrait of the UK in the second decade of the millennium.

So from this we must assume that hardcore anti-Israel activist, International Solidarity Movement and Free Gaza Movement campaigner, pro-BDS protestor and Gaza support worker Adie Mormech and his mum volunteered for the project and introduced themselves to their local BBC radio station.

Given that Adie's life is given over to anti-Israel activism, it seems very likely to me that his motives were those of an anti-Israel activist, and that he spotted an opportunity to espouse his anti-Israel propaganda to millions of Radio 4 listeners, and took it - with his mum's help.

Now, Adie and Ruth were supposed to have been having a conversation "about a subject they’ve never discussed intimately before", but they must have had this conversation before - something we can safely assume thanks to the BBC's own archive which holds a written report and two interviews (one with Adie, one with Ruth) from 2009 about his experiences and his mother's reaction to his experiences (the same experiences they described on The Listening Project, with certain embellishments).

Were they pulling the wool over the BBC producers' eyes here? Were the BBC taken for a ride?

If so, why didn't the BBC producers bother to check their own archive? (It's not hard to do. We did it easily enough!) Doing so would have told them that something rum was going on here.

More to the point, did the BBC producers do any checks on Adie Mormech whatsoever, at any stage of the whole process? If not, why not? It's surely remiss of them not to have done so, isn't it?

If they did know about his hardcore anti-Israel activism all along, did they have no problem with it? Did it not put them off? Did it in fact make them all the more eager to broadcast it? Would they perhaps say, "It doesn't matter because, despite his activism, it was the fact that at the time he 'didn't' tell his mother of the "danger he was in' that interested us"?

There are lots of questions for the BBC here. A complaint to the BBC may be the way to find out a few answers.
Posted by Craig at 15:58