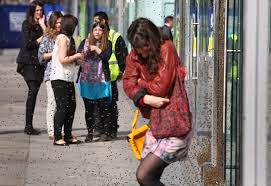 It's been far too sunny today to bother with the BBC and its bothersome bias, but I did listen to Paddy's Saturday PM.

She wasn't impressed with the UKIP spin doctor's intervention in that interview, or with Nigel Farage - and Paddy was in no hurry to talk her out of either of those feelings.

Now (and only fans of The Thick of It will get this) if Tony Blair had Malcolm Tucker as his press secretary and Gordon Brown had Jamie McDonald, then Sir John Major surely had Terri Coverley, as played (with great panache) by Sheila Gunn. She comes across as the sort of press secretary John Major was bound to have - a nice, decent, loyal lady who probably likes dogs (the kind of person Alistair Campbell eats with fava beans and a nice Chianti.)

Here's a taste of their conversation today:

Paddy: I wonder if you can just offer us an anecdote, when things were pretty bleak for you and you made a mistake. It's difficult...I hope you never ask me to do that, although the list is long...but would you like to offer something up from when you...I mentioned the pressure you must have been under. Do you remember doing something that you shouldn't have?

Sheila: Oh dear, yes. I made an awful lot of mistakes, I'm afraid. And remember if you're actually dealing with a journalist day by day and they're asking you, 'What does the Prime Minister think of this, that or the other?', I didn't always get it right, obviously, and occasionally John Major would say the next day, "Oh, it's interesting, you know, that this is my view on this subject", whereas I'd actually given his view without giving him the chance to clear it with him. So, no, I'm certainly not blameless in that.

I was mainly there for the swarming bees though.

A chap called Ted (with a Polish-sounding surname that I'm struggling with) told us that there are a lot of swarms around at the moment but that we shouldn't panic if they engulf us on the high street.

Bees are not aggressive when they're swarming. They are in such a state that they can barely bend their abdomen to give us a sting even if they wanted to (which they don't). Plus, they've no hive or young to protect.

So don't panic and don't start waving your arms around if you are ever engulfed in a swarm of bees. Just close your eyes and stay calm.

Yes, it's that simple, and I for one would quietly whistle 'The Sun Has Got His Hat On' (taking care to barely move my lips) whilst waiting for them to move on.

Swarming is natural, said Ted. Bees have been doing it for 150 million years (as well as falling in love.)

So there you go. You now know how to deal with a swarm of bees if you ever find yourself surrounded by one whilst going to SpecSavers.
Posted by Craig at 22:20