Good morning. Here are the stories chosen for broadcast on this week's editions of Newsnight:


Tuesday 6/5
1. Pfizer v AstraZeneca: "Sticking their noses in? The Business Secretary threatens to change the law. So he could stop a mega-merger. But why shouldn't American drug giant Pfizer gobble up AstraZeneca if that's what the market wants?" Interview with Chuka Umunna MP (Labour) & Margot James MP (Conservative)
2. Race in Britain: "What does the country see in the mirror? Staring back right now is a population where 8 million of us are not white. That's 14% of the population. But by 2050 that might have doubled. So says the think tank Policy Exchange. And where populations shift, votes can shift too, so smart politicians and policy makers would do well to pay attention. But have they really cottoned on?" Interview with Ken Livingstone, former Mayor of London (Labour) & Sam Gyimah MP (Conservative).
3. Pistorius trial & South African justice: "On the eve of the elections in South Africa, has the Pistorius trial shown there's still one rule for white and one for black?"
4. Prisoners book ban: "The names of the authors who opposed it could have almost been a best-sellers list themselves. The Ministry of Justice's plans to limit prisoners' access to books provoked howls of protest in sometimes rather non-literary terms. But this evening Newsnight's discovered that the government might have run into a bit of trouble with the plans."
5. Fines on indebted football clubs: "You might be forgiven for being surprised to learn there are limits on how much football clubs can spend, although you might wonder how effective the 'Fair Finance' rules are when top earners can take home £300,000 a week. Yes, a week! But at the other end of the scale non-league players are lucky if they get an orange slice at half time, yet EUFA has created a set of rules to try to stop reckless spending to prevent clubs building up suicidal levels of debt and they face hefty penalties if they ignore them. And the same bulging cheque book that secured Manchester City the Premiership is set to land them in just this kind of trouble." Interview with Mark Palios, former FA chief executive & Professor Tom Cannon, Liverpool Management School.
6. Roger Bannister: "And it's six decades since Roger Bannister ran into the record books. He tells us how he did it." Interview (during report) with Roger Bannister, first man to break the four-minute mile.

Wednesday 7/5
1. Pfizer v AstraZeneca: "We don't seem to be much closer to the promised or threatened takeover of the British pharmaceutical company AstraZeneca by the massive American firm Pfizer. Having previously said that the fact that Pfizer wants to spend $100 billions or so on the biggest takeover in our history was a vote of confidence in Britain, today the Prime Minister said he wanted more assurances on jobs and investment to decide if it was in the national interest. Meanwhile, Ed Miliband accused Mr Cameron of cheer-leading for the bid."
2. Life in a vertical slum in downtown Caracas: "If you're looking for a working example of a country in chaos you can't do much better than Venezuela whose unusual president - a maker of interminable speeches and scourge of imperialism worldwide, Hugo Chavez, has been dead for a year. In that time the country's been engulfed by runaway inflation, rampant crime, food and housing shortages. This crisis was exemplified by one building in downtown Caracas familiar to fans of the U.S. drama Homeland. It's called the Tower of David, an unfinished skyscraper that was a no-go zone just two months ago. It's no home to thousands of squatters who've taken matters into their own hands. They police it, renovate its rooms, and plumb it into the city's electricity and water, and all for peppercorn rent."
3. The 2015 general election: "A year today, May 7th 2015, we shall be choosing a new government. A huge amount can happen in that time so the outcome is unpredictable. So too, frankly, is much of the campaign. There is so much to come - the European elections, a cabinet reshuffle probably, the referendum on Scottish independence certainly, and in all likelihood the end of the coalition, to mention but four. As Emily Maitlis reports though, all parties have to adjust to some uncomfortable facts." Interview with Baroness Grender (Lib Dem), Lord Finkelstein (Conservative) and John McTernan (Labour).
4. Irvine Welsh's latest novel: "An investigation by medical researchers was reported today to show that more people are dying as a consequence of being overweight in Britain than anywhere else in Europe. There's no question that obesity is bad for you, but is thinness next to godliness? Irvine Welsh's new novel tackles the slimness creed. The protagonist is a personal trainer so committed to the 'War against Carbs' that she acts like a health and fitness Nazi. 'The Sex Lives of Siamese Twins' is as filled with four-letter words as you'd expect from the author of 'Trainspotting' and features many varieties of sex since the trainer is also a predatory bisexual." Interview with Irvine Welsh.
[Closing credits: A Paxo-Dizzee Rascal interview with Shakespearean subtitles "for Michael Gove".]

Thursday 8/5
1. Boko Haram's kidnapping of schoolgirls: "Nigeria's president insists the the mass abduction of schoolgirls is the beginning of the end of terrorism in his country but, even with international efforts, can he beat Boko Haram?" Interview with Nigeria's interior minister, Abba Moro.
2. Pfizer v AstraZeneca, & Labour's response: "The U.S. pharmaceutical giant Pfizer is still in full pursuit of AstraZeneca despite the British company's rebuff, and Labour has been pushing the government hard over an issue they say puts British jobs and British science at risk, but did Ed Miliband come rather late to the party - much later than he likes to make out?"
3. Frontline fighting for female British soldiers?: "The right to bear arms and fire them. Should women in the army be allowed to engage in close combat? Two of the most senior women to have served in the British Army disagree." Interview with Nicky Moffat, former British Army brigadier & Judith Webb, former British Army major.
4. Ukraine: "Pro-Russian separatists in Ukraine are defying President Putin's call for them to put off Sunday's referendum, so is the prospect of war looming closer?"
5. Variations in health across England: "For thousands of people in England football is a life-and-death business. Metaphorically-speaking. Well actually literally. Using Public Health England's latest data on life expectancy Newsnight's Chris Cook, an avid football fan, decided to undertake a bit of mental rather than physical exercise. Using catchment areas of football clubs alongside the data he's analysed where in the country people are likely to live longer."
6. Pushy parents & UK education: "'Tiger mums', 'pushy parents', 'hot-house kids' - education is littered with judgmental epithets when it comes to parental involvement in education, but a leading educationalist - once a top man in Tony Blair's team -  says that children in the UK are being held back by a culture in which we undervalue hard work and parents don't push. This stands in stark contrast to East Asia..." Interview with Sir Michael Barber, Pearson chief education adviser & Pasi Sahlberg, Harvard School of Education.
7. New ways to fight diseases: "And the secrets of the deep: How our oceans could provide new drugs to replace dud antibiotics."
[Closing credits: images in memory of space scientist Colin Pillinger, who has just died.] 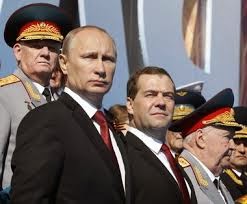 Friday 9/5
1. Ukraine: "A deadly battle in the Ukrainian city of Mariupol between government forces and pro-government militants leaves at least seven people reported dead. As tension reignites, Gabriel Gatehouse is in Donetsk just to the north".
2. Russia: "Red Square President Putin celebrates V.E. Day with a massive show of force and then heads to Crimea. Mark Urban is in Moscow."
3. Boko Haram's kidnapping of schoolgirls: "A British team arrived in Lagos today to join the American and Nigerian search for the girls kidnapped by Boro Haram as Amnesty International released a report claiming that Nigeria's security forces had had at least four hours advanced warning on the state-run school and failed to act. Amnesty's Africa Director said it amounted to "a gross dereliction of Nigeria's duty to protect civilians." Interview with Kate Allen, head of Amnesty International in the UK.
4. Internet piracy: "'DOWNLOADING PIRATE FILMS IS STEALING'. Except, of course, it's not. A proposed deal with the internet service providers could mean the penalty for internet piracy is a gentle telling off. Rap star Tinchy Stryder isn't impressed." Interview with Tinchy Stryder, singer & Milo Yiannopoulos, technology columnist, 'Business Insider'.
5. Alan Bennett: "And Happy Birthday, Alan Bennett. Only 80 today. Any regrets?" Interview with Alan Bennett, writer.
[Closing credits: sketch showing Alan Hanson blowing up Jimmy Hill. Alan Hanson is giving up punditry].

Plus Newsnight plugged an upcoming special on Europe:

That will be a good test of the programme's pro-EU bias.
Posted by Craig at 08:40