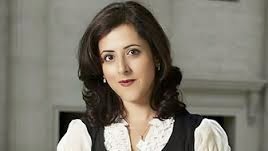 I was taken right back to my late '80s university days today whilst listening to Any Answers with Anita Anand.

Poor old John from London (clearly advanced in years) was being very nice about Chuka and critical of the press for intruding into his private life but, alas for him, he committed an unforgivable social faux pas...

...one that the BBC's Anita (at uni on the cusp of the late 80's/early 90's) simply could not let pass without wagging a self-righteous finger:

John from London: You see, when it comes to a vote it would either be a free vote or it would be at a party diktat. Now, if it's a free vote he can quite easily stress his opinions but he has to bear in mind...

Anita (interrupting): Or she! He or she, yeah? Huh-huh?

John from London, alas, failed to take the wagging finger on board and continued regardless:

John from London: He has to bear in mind his constituency. He is...they are the ones he's representing.

Oh John from London, please go and sit on Anita-from-the-BBC's naughty step!
Posted by Craig at 16:25