Spider letters, ITV and the BBC 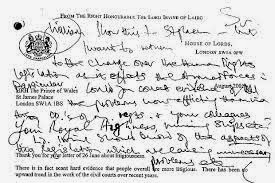 My goodness, there was one heck of a difference between the ways BBC One's News at Six and ITV's News at 6.30 reported Prince Charles's 'spider letters'!

The angle on ITV's main evening news bulletin was that the Prince had warned Tony Blair's government about shortages in equipment for British troops in Iraq. ITN's Tim Ewart's report gave us a glimpse of one of Charles's letters to Tony Blair and then two extracts from Tony Blair's long and clearly carefully considered response, showing how seriously the Prince's intervention. This was followed by the welcoming of Prince Charles's views from Roger Bacon, father of Mjr Matthew Bacon, a British officer killed in Iraq. Tim Ewart's report then ended with former ministerial advisor Paul Richards, saying that the Prince's letter had an impact and were taken seriously. Only in a brief follow-up discussion with the ITV newsreader did Tim Ewart say the Prince Charles's critics accuse him of meddling and overstepping the bounds.

BBC One's coverage was almost the mirror image of ITV's. The opening headlines included anti-royalist Labour MP describing some of Charles's interventions as "eccentric" and "barmy" and Nicholas Witchell's report gave us the forced publication angle, raising the question of "meddling" early one. His take on the Prince's Iraq intervention showed Charles's letter but not Tony Blair's reply. Other letters to Mr Blair and Labour ministers were shown, against with no responses? Nicholas asked, "Is that appropriate language to use to a minister?" That anti-royalist Labour MP, Paul Flynn was then heard at greater length criticising the Prince and then, 'for balance', former Labour minister Denis MacShane (yes, that Denis MacShane!), talking about "Charlie" and saying that the Prince's concerns arise from reading the Daily Mail and the Daily Telegraph, and that it doesn't matter very much because the Prince's letters didn't "have much impact". Only in the studio discussion afterwards, did Nicholas Witchell put a more positive case for Prince Charles, saying that it shows that he cares, that he can't just walk by a problem and that he's met many people over the years - more than most politicians, but he ended by repeating that most politicians say they don't necessarily "take any notice of them."

The two reports could not have been more different.  ITV's report featured a strongly supportive 'talking head' while the BBC's featured (and led with) a strong critic and someone who damned the Prince with very faint praise (both figures from the Labour Party, present and past). Plus, ITV's report made the case that Prince Charles's interventions were taken seriously and responded to at length. The BBC made the case that his interventions, while constitutionally dubious, weren't taken seriously at all.

To say that ITV has a pro-monarchist bias and the BBC an anti-monarchist bias on the strength of just these two contrasting reports would, of course, be to jump the gun and land in a minefield.