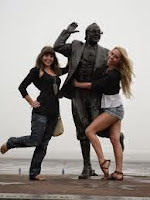 If you're a regular reader of this blog, you'll know that Morecambe is Britain's sunniest seaside resort.

It has its own micro-climate, being bounded by the Lakeland Hills to the north and the Pennines to the east. This means that it's almost permanently sunny here - as I was saying only the other day to the head of Morecambe's Tourist Board.

(Even the Saudi ambassador, coming to see the Eric Morecambe statue - and demanding that it be pulled down - found it rather hot here.)

What possible reason have sensible, sun-loving people got, I added, for not booking a holiday here, say at Morecambe's magnificent Premier Inn (overlooking the back of Iceland - the shop, not the country - and a fabulous main road), or at any of our fine hotels and B&Bs?

God knows why we went out in it.

The BBC's Roger Harrabin - who we spotted on Morecambe's superb Stone Jetty, looking out lovingly towards the offshore wind turbines right at the end of Morecambe Bay, which (usually) glint away on the horizon like so many shiny barbed toothpicks - was clearly feeling a bit embarrassed at just how cold it was.

We reminisced about his former colleague Richard Black and my former colleague Robin at Biased-BBC, whilst shivering. Roger said he was jetting off to somewhere even sunnier than Morecambe soon - one of the perks of the job.

Even the Eric Morecambe statue looked forlorn today. Yet as soon as we got back, mid-afternoon, the sun came out.

(If the Eric Morecambe statue starts pleading 'Bring Me Sunshine', the sun's hardly going to say 'no', is it? And this is Morecambe after all. It's not like Barrow-in-Furness, over the bay. It's always grey and rainy there).

Roger - who we'd invited back for some environmentally-friendly coffee - asked me why I was writing a post that has absolutely nothing to do with BBC bias - except for a few quips at his expense. Shouldn't I be writing something serious about some devastating example of BBC bias instead?

I agreed and asked him to tweet something biased for me to complain about - and, if he didn't mind, to copy in George Monbiot for good measure. He duly re-sent out two of his latest tweets:


"Cheers, Roger", I said. "But why do you always seem to @ George Moonbat? Doesn't that look a bit, well, strange?"

"I @ George all the time because I love him, and worship the ground he walks on," replied Roger. "And in my dreams I'd like to take him to Ireland to have Steph Hegarty marry us."

"Bless!", I said, pouring him a second cup of fair trade, organic coffee (which I'd had to rush out and buy, just for him).

"Don't you think though," Roger added, "that this post of yours is a bit trivial? I mean, it's not as if I really met you today or said what you're saying I said. Won't it all seem a bit superficial to your readers?"

"Should we drive out to Heysham Nuclear Power Station?" I asked. "You'll love it there. I heard your colleague in Japan, Rupert Wingfield-Hayes, being biased against nuclear power on this morning's Today. Did you hear his report?"

"Yes," replied Roger. "I thought it was excellent - not quite as anti-nuclear and pro-renewables as I'd have made it, but pretty damn good nonetheless. I taught him well."

Heysham's nuclear power stations look lovely in the evening sunshine, like a pair of huge, cuboid, concrete Salma Hayeks. Roger's not looking too happy though, so we walk down to the shore to gaze out towards the offshore windmills instead. He perks up.

"Drive safely", I said, as he got into his car and drove off, exhaust-fumes-a-flying, into the distance. I waved goodbye, like an inconsistent windmill, before mounting an organic Morecambe donkey and coming back to publish this GM-free post.
Posted by Craig at 18:43