Would it be fair to say that the BBC is gloating over the latest Ukip debacle?

After the BBC’s pre-election attempts to sideline Ukip, then all that speculation about the imminent collapse of Ukip following Douglas Carswell’s refusal to accept all the ‘short money’  which various Ukip members thought they were entitled to keep.
(Isabel Hardman’s piece in the Spectator attracted several scathing below the line repsonses.)

Now there’s this new row about Nigel Farage’s leadership and personality, sparked off by an article in the Times (£).

Nigel Farage has become a “snarling, thin-skinned, aggressive” man who is making Ukip look like a “personality cult”, the party’s campaign director has claimed in a devastating attack.
Patrick O’Flynn, the party’s economics spokesman and one of its most senior MEPs, breaks cover today to warn that the Ukip leader’s recent behaviour risked depicting the party as an “absolute monarchy”.

One aspect of this unfortunate row is that it does make one reflect in awe at how hard other political parties, much bigger than Ukip, strive, and usually succeed in keeping their internal squabbles in the family.    The downside, from the public’s point of view is that it does lead to the robotic repetition of the party line like Priti Patel’s Dalek-like chanting of Tory party policy I watched on the excruciating Victoria Derbyshire show yesterday. (lucky she’s good looking, with such a name.) (Priti, not Victoria)

However, at least part of the behind-the-scenes disharmony in Ukip is said to boil down to a couple of Nigel Farage’s advisers, one of whom is Raheem Kassam.

I’ve been wondering about the slightly mysterious Kassam ever since that odd outburst of cryptic Tweets by Robin Shepherd of the Commentator, which hinted at a scurrilous betrayal by his (ex)partner Kassam. Some said Robin Shepherd must have been completely pissed when he Tweeted.
I have to say that I used to enjoy the pro-Israel blog “Robin Shepherd Online”, but when he set up the more ambitious ‘Commentator’ project with Raheem Kassam I was less keen. It seemed to feature very few of Shepherd’s own articles in favour of a more varied, broader political remit, which was obviously a step up, but at the same time a kind of dilution. ( I’m probably alone in that) 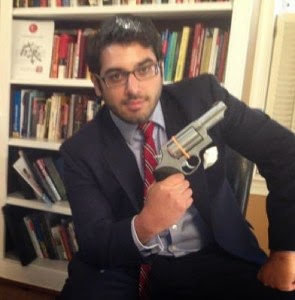 Here’s a bio of Kassam from one of his -  shall I say ‘political opponents’? You can see where Mr. Mushy Peas coming from in this intro.

“UKIP’s newest fascist to join their ranks is none other than Raheem Kassam, a former managing editor of the right-wing website Breit­bart and he has been hired as the party’s new election strategist.”

Anyway, this is what the author has to say about the Kassam/Farage relationship.

“Raheem Kassam has become the person Nigel Farage refers to as his “boy” or “my man”.  I would suggest you read this piece here for little bit more information on the right wing Raheem but briefly, he is of Indian Ismaili (not to be mistaken with Islam or Muslims) origin, his parents are immigrants from Tanzania (what an irony that he is now a member of UKIP, who knows, he may seek to ask his parents to leave the UK).”

So is Raheem Kassam a trouble maker and a damned nuisance? He certainly seems to have ruffled some left-wing feathers.

Liberal Conspiracy Sunny Hundal  June 2012.
The accusation here is that Kassam has been fiddling with Wikipedia. But then who hasn’t?  “

Kassam loves trolling left-wingers, including Mehdi Hasan (calls him “hateful” and an “extremist”), Laurie Penny and Shami Chakrabati, whose resignation he demanded from the LSE.”

Well, is that a plus or a minus?

There is definitely some litigation in the air. Goodness knows what Kassam actually did, but whatever it was it doesn’t make him sound very appealing as an associate.
Ian Dale: February 2013

Trouble at t’mill at The Commentator where Raheem Kassam has upped sticks and left to form his new multi-contributor website Trending Central. Kassam was somewhat tightlipped when I called, but it seems he has had a falling out with the owner of The Commentator, Robin Shepherd. It seems that My Learned Friend has become involved. However, the very entrepreneurial Kassam has wasted little time in setting up Trending Central as a multi-authored commentary platform. It seems to have a much wider remit than the foreign affairs and Westminster politics themes of The Commentator. “We’ve already attracted some big name contributors and we want pieces from people who are sick to death of being constrained by the mainstream media," he tells me. Indeed, it seems that most of the Commentator contributors have jumped ship with Kassam. Building traffic for a multi-authored site which covers a raft of subjects is no easy task, as I remember from Dale & Co. But if anyone can do it, Kassam can.

In July 2013 Kassam launched a new blog news website called Trending Central, which '..was conceived with a view to bring fast-paced, interesting news items and blogs to the English speaking world'. Run by a voluntary staff of writers and analysts:
The site is geared towards serving the Anglo-sphere content that is of a political or cultural nature, though we’re totally open to things like book or restaurant reviews, as well as anything else interesting you might be able to muster up. Please do consider that the site is pro-free markets, pro-democracy, pro-Western and pro-Israel in its outlook, so if any of that bothers you, perhaps you should look elsewhere!Contributing editors as of September 2013 included: Peter C. Glover (Energy, Markets, Geopolitics and Environment) Fernando Menendez (North America, Central America and Latin America, Economics), Benjamin Harris-Quinney (British and European Politics) Andrew Ian Dodge, US Politics, Nathalie Tamam (Middle East, British Politics), Simon Miller (Finance, Civil Liberties). [10]Breitbart LondonIn February 2014 the Guardian reported that Kassam would join 'green-baiter' James Delingpole as part of the team working for a new London outlet of the right wing U.S.-based news and opinion website Breitbart.[11]UKIP roleIn October 2014, Kassam's own news site, Breitbart London, announced that he would be leaving the organisation to start working as 'senior adviser' to United Kingdom Independence Party (UKIP) party leader Nigel Farage. The move followed Kassam's work on a number of UKIP puff-piece for the right wing media outlet. According to the write-up, the role was 'the first of its kind as UKIP grows and professionalises' and Kassam was 'set to lead on advising Mr Farage in developing party messaging, strategy, fundraising and publicity'.[12]The right wing Spectator magazine mocked the the appointment, calling Kassam 'troublesome', 'wildly self-important', and a 'professional wind-up merchant'. Columnist Steerpike noted that the fawning tone of the anonymous Breitbart Londonannouncement, including the line:'Breitbart understands from senior UKIP sources that Kassam was picked specifically for his political nous and campaigning prowess'.The Spectator suggested that UKIP could now adopt 'vicious American-style attack politics' and suggested that 'if UKIP is trying to be popular, they could hardly have picked a more unsuitable hire'.[13]

So what’s going on? Has Nigel Farage made a hugely damaging  decision in bringing Kassam into the fold, or is it all some kind of left-wing smear?

Judging from the (possibly coincidental) havoc wreaked in Kassam’s wake, wherever he goes, it does seem a bit like a case of “If you’re looking for trouble - you came to the right place”

Update  No. 2 (The Commentator)


"Kassam had already been reported to the police under the Fraud Act. He stands accused of multiple counts of fraud, as well as theft, blackmail and extortion. Tens of thousands of pounds are reported to be involved.
He is also accused of false and malicious accusations of harassment against his alleged victim."

"Interpol may be involved, given that Kassam's alleged offences took place in more than one jurisdiction. Cross-border tax crime regarding a UK law firm is also under consideration."