Cos you're worth it?

I haven’t listened to “You and Yours” radio 4 for a long time, but today I happened to hear the phone-in about the licence fee. Does the BBC licence fee represent good value for money?

Apart from the obvious irony of the BBC controlling a phone-in that was supposed explore its own value for money, and notwithstanding Winifred Robinson’s tendency to cut short anyone who said nay and lingering indulgently over those who said yea, several unaddressed issues were left hanging heavily in the air.

Some callers said the BBC ‘wasn’t for them’ because few of the programmes interested them. After the first one, these callers probably should have been filtered out of the discussion. Who cares that they only like one programme, the title of which they couldn’t even get right. (Montalbano)

Most of the negativity was about profligacy, particularly salaries; one caller mentioned the exorbitant number of BBC reporters that covered the mining disaster in Chile. No-one mentioned Gaza.

The BBC employs an enormous number of reporters. Someone quoted a figure, which I’ve  forgotten, but it’s certainly a sufficient quota to expect rigorous verification and scrupulous checking when reporting, quoting or disseminating sensitive news. I.e., not regurgitating, copy-and-pasting from Reuters or AP, or ‘editing‘ facts to suit an agenda.

The way the BBC reported the so-called ‘Arab Spring’ was a disgrace; the BBC subsequently admitted they got it wrong. The reporting of matters concerning Israel and Gaza, riddled with pro-Hamas bias, histrionic emoting, the entire situation distorted and disfigured by gross omission. The consistent repetition of Hamas/UN-sourced civilian casualties, unverified by the BBC yet clearly having been manipulated to suit Palestinian propaganda. The absence of reports of any of the extreme incitement or antisemitic rhetoric that is rife in the Arab world, from the religious leaders to the education system. It’s not hard to find, so why has the BBC ignored it?

The bulk of the callers who were more than enthusiastic about the BBC’s value for money cited the breadth of the BBC’s coverage, its trustworthiness and its world-wide influence, which they evidently believed was all to the good. For the betterment of mankind, as the saying goes.

I don’t think the word ‘impartial’ cropped up, but the general assumption was that the BBC was Gold Standard in terms of reliable balanced newsgathering.
No-one mentioned political bias or any other kind of bias, but since the matter of world-wide influence came up, I think it’s reasonable to have expected someone to have raised this topic.

I would like to know how people who praise the BBC for its reliability evaluate ‘truth’ ‘impartiality’ and ‘balance’. For example, they will usually say “Look at Fox” or “RT” or Al Jazeera”. They will bring up Rupert Murdoch or “The right-wing Tory press” and say we evaluate the BBC against organs of propaganda like these.

There is some truth in that argument, but also a flaw.

If Fox, Russia, Qatar, the Daily Mail or whatever you like are biased and propagandistic - and they surely are -  they still cater for a widespread audience. They wouldn’t be viable otherwise, would they?  Can they all be simply ‘wrong?’
How, then, is it so inconceivable that the BBC might just be pandering to and catering for an equally partial type of viewer? And, if the BBC provides a counter-view to the ‘right wing’, then isn’t that tantamount to admitting that the BBC is left-wing?

What is wrong with that? The trouble is that the left-wing has somehow adopted an all-enveloping, self regarding cloak of righteousness under which it has blindly swept some undesirable causes into its folds.

Critics of the Biased-BBC blog often argued “You don’t want an unbiased BBC, you just want the BBC to share your own bias”. That also contains an element of truth, and
that is why we at “Is the BBC Biased?” try to give credit where it’s due.

There is a lot to admire about the BBC, BBC Four for one thing, but if the corporation continues to view everything through the vacuously P.C. prism highlighted (perhaps unintentionally) in its own parody-that-isn’t-much-of-an-exaggeration “W1A” it’s of no value at all. 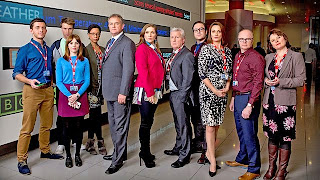