The Catholics seem to be all over the place. Not so long ago they blamed the Jews for killing Jesus, which accounted for a great deal of Catholic antisemitism back in the day.

Then Pope Benedict XVl decided to forgive them.

Unfortunately Pope Francis might have decided to unforgive them again, since he’s about  to recognise a Palestinian State and canonise two 19th c. Palestinian nuns in an attempt to

“strengthen the Christian presence in the Middle East at a time when when hundreds of thousands of Arab Christians are fleeing Islamic violence.”

Does that compute? I don’t quite get it, but hey, as they say on the internet, ‘hope that helps’.

Now it looks like Pope Francis has gawn stark staring bonkers.  He’s given that devious old rogue Mahmoud Abbas a medal, and called him an “Angel of Peace.” 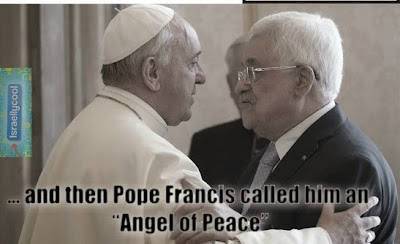 “The BBC's David Willey in Rome says that after 20 minutes of private talks, Pope Francis gave Mr Abbas the medallion depicting an angel of peace adding: "It is appropriate because you are an angel of peace."

Umpteen other news outlets including the Times of Israel also report that the Pope called Abbas an “Angel of Peace”. What can this mean? Your holiness cannot be serious!

Italian is such an obscure and untranslatable lingo, we can’t expect the BBC to go to the trouble of finding an independent Italian-speaking translator.   What’s that saying -  “A mistranslation can travel half way around the world while the truth is putting its boots on”.

There is a difference between stating something is a fact and wishing it were.

Italian sources suggest that ‘you are’ was a mistranslation of ‘may you be’ . This is their version, which does sound like a more rational thing to say of Mahmoud Abbas.

“ As is tradition with heads of State or of government, Francis presented presented a gift to the Palestinian leader, commenting: “May the angel of peace destroy the evil spirit of war. I thought of you: may you be an angel of peace.”

Pope Francis had called Abu Mazen a “man of peace” when he visited Bethlehem in May 2014, just as he called the then Israeli Prime Minister, Shimon Peres, a “man of peace” during his subsequent visit to Jerusalem.”

The difference between “You are’ and “may you be” is quite profound, wouldn’t you agree? It’s very nice that the Pope wishes Mahmoud Abbas will turn into an Angel of Peace someday, if that is indeed what he did; but I’d prefer it if his holiness would just butt out.