All the news that's fit to bury on the Sports page

The latest stunt by the Palestinian Authority - an attempt to politicise football and get Israel chucked out of FIFA, much trailed by the BBC in recent days (on Radio 4 and the World Service especially) - has collapsed. 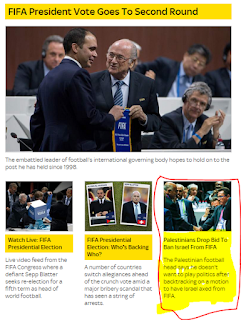 According to Sky News (on its home page - 3rd main story), "The Palestinian football head says he doesn't want to play politics after backtracking on a motion to have Israel axed from FIFA."

Oddly, the BBC News website - which is leading with the FIFA elections, now entering a second round - doesn't choose to highlight this story. It's not a story presently appearing on their home page.

There is a short article about it though on the Sports page, Fifa congress: Palestinian FA drops bid to have Israel suspended. So, yes, they have reported it (sort of).

Now, if FIFA had decided to throw Israel out of its corrupt organisation, who doesn't think that the BBC would have led with it, or made it their second (or third) story?
Posted by Craig at 18:21