Senior BBC producer, of UKIP: "Hopefully it's the last we've heard of this lot"


Louise Greenwood, senior producer for BBC News, is another BBC journalist who likes to tweet: 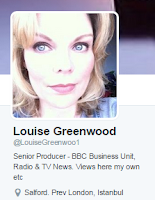 Her views on the BBC licence fee and on the free market aren't exactly surprising for a senior producer at the BBC Business Unit:

If the BBC licence fee is top sliced to pay for rural broadband isn't that an admission of free market failure in another key industry?
— Louise Greenwood (@LouiseGreenwoo1) May 12, 2015

And neither for that matter is her utter contempt for UKIP:

The challenge to find BBC Tweeters who tweet from the Right (other than Andrew Neil) goes on.