Damian Thompson of The Spectator and The Catholic Herald did a 'me' and speculated yesterday about what would be on this morning's Sunday on Radio 4:

Wonder if the wildly biased @BBCR4Sunday is planning a hatchet job on Cardinal #Pell tomorrow. Stourton is friends with Pell’s opponents.
— Damian Thompson (@holysmoke) May 30, 2015

No such hatchet job on Cardinal Pell took place; although he was mentioned.

Damian, however, shares my much-repeated belief that Sunday tends to sound like the audio equivalent of the liberal Catholic magazine The Tablet - of which the programme's main presenter Edward Stourton remains a trustee.

That said, am I am guilty of overstating the case against Sunday?

Yes, there was that Tablet 175th anniversary edition a couple of weeks ago where the magazine got a lot of highly favourable coverage (aka 'a plug') and, yes, the programme does still focus unusually heavily on purely Catholic matters...

...but is it really fair to describe Sunday as 'The radio version of The Tablet'?

It was a good-natured interview, with Lord Patten expanding on his points at length and receiving no challenging questions from Edward. (Please listen to it and you might almost hear Ed purring in the background).

Many might say you were brave to take this on. Certainly under the last pope [i.e. Benedict] scarcely a week seemed to go by without the Vatican apparently shooting itself in the foot in media relations!

Were you impressed with Pope Francis?

Oh, I mean, I'm a bit old to go into hero worship. I think he's probably the most remarkable person I've ever met. I mean, he's astonishing. He's like...sorry, to some people this may sound a bit soppy or sanctimonious, but it's like the Gospel of St. Matthew embodied in one person. He's just remarkable - witty, normal, not sort of behind great formality or ceremonial or ecclesiastical millinery. He's a wonderful human being.

Yes, I know that's exactly the sort of thing that leads me to regularly describe Sunday as 'The Tablet on air', but at least Lord Patten isn't a fellow trustee of Ed's at The Tablet. 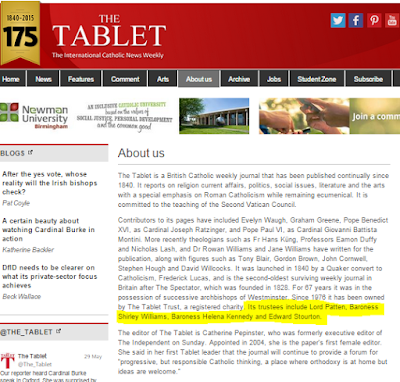